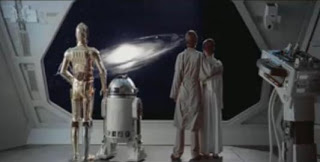 Because I was born three years after the release, I have a different perspective of the film than those fans that saw it in theaters back in 1980. By the time I saw it as a kid, the plot twists were common knowledge. Every person in America knew the iconic revelation from Vader. We all knew Han Solo would not only survive the carbonite freezing, but also live to embrace Leia during the celebration on Endor. And now is just seems natural that a legendary Jedi master is also a short, olive green muppet in a bath robe.

What I’m saying is, it is easy to forget just how daring a sequel this is. It turned many of our preconceptions about the universe and its characters on its head. I don’t know if anyone was expecting Luke to go as dark as he does in Empire, for one. He was always the innocent, wide-eyed farm boy who saved the day. After he goes into that cave on Dagobah, things get a whole lot more complicated. Many of his preconceived notions about both power and goodness are demolished by his training with Yoda and his battle with Vader. While some might have guessed his identity in the first few minutes after his introduction, the revealing of Yoda as the Jedi Master our hero is trying to find is one of the better moments in the entire series. While so much of Star Wars borrows from western traditions (fairy tales, the Knight’s Code and the more modern Flash Gordon stories and the Nazis in WWII), Yoda is almost a dead-ringer for the ancient, but almost transcendent sensais in kung-fu movies. The continuing idea of true power through inner peace and meditation (brought full circle with the Jedi Master lifting the X-Wing from the swamp) is extremely Eastern philosophy and yet blends itself so well into this scifi universe. Of course, you can’t talk about Empire without mentioning the pivotal scene between Luke and Vader. If there was any “what the hell” moment for fans during the initial release, this had to be it. And while Lucas has admitted he decided to make Vader Luke’s father after New Hope was released, it does make some sense looking back (as long as you just look at the original trilogy, of course). In New Hope, Obi Wan mentions to Luke that his father was a great pilot. When the Rebels go after the Death Star, it just so happens that Vader is expertly shooting down the Rebel pilots one by one. And it makes the battle between Obi Wan and Vader in New Hope that much more intense; it was epic when it was Obi Wan against the man who killed his best friend, but it takes it to a whole new level when Obi Wan is actually fighting the friend who betrayed him.

Then we get to the also complicated relationship of Han and Leia. In A New Hope, we see some very, very light flirting, but little more. By putting them together in a restricted place (sans Luke), the pressure cooker of passion gets started almost immediately. Sure, some of their courtship is for comedic purposes (like when C3PO walks in right at the worst time for Han), but all of it is to build up to that moment in the Cloud City when the couple find themselves saying goodbye, possibly forever. We can thank Harrison Ford for choosing to change Han’s response to Leia’s declaration of love from “Just remember that because I’ll be back,” to the infinitely more badass “I know.” In his own way, Han lets himself be vulnerable in that moment as much as Leia is. For that first audience back in 1980, this really could be their last goodbye (watching Han not take his eyes off Leia still gives me chills). It’s an insanely romantic scene with one of the most passionate kisses I’ve ever seen in cinema.

There is still something I haven’t touched on yet. While New Hope was a great movie, the Empire is defeated fairly easily. One weakness in the exhaust port and the Death Star becomes the Titanic of space stations. In Empire, we really get to see how powerful the enemy is. The movie ends on kind of a downer, with Luke disillusioned and down a hand while Han (after being needlessly tortured and then used as a scientific guinea pig) is possibly lost forever. And unlike Episode IV, in Episode V the Empire is still strong, if not stronger. It’s a dark ending indeed and a more interesting one than if the heroes won the day again. It also makes the last act of Return of the Jedi that much more thrilling. Sure, the fans were pretty confident that good would win over evil, but what price would they have to pay?

I’m sure some readers will question my gushing over the film, but you have to understand that I watched Episode II recently and I can’t help but appreciate all the good that is in Empire. Watching it again just reminds me of a time when the Star Wars series was still about powerful storytelling and cultural and emotional relevance. That time was 1980.

By the way, if you want to learn 100 random facts about The Empire Strikes Back, check out this list IGN published this week.
Share On