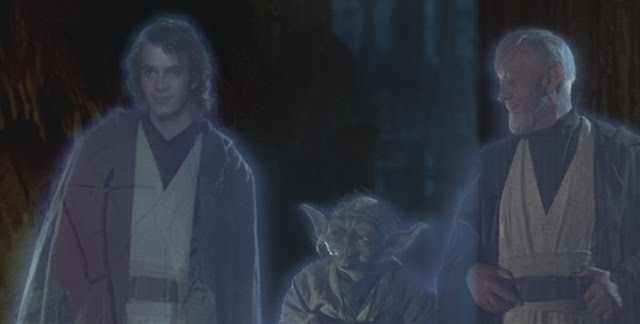 Most of my readers won’t be surprised about this, but I am a nerd.

Many of my nerdy endeavors grew while I was in college and into my adulthood (I only discovered Doctor Who this past summer), but throughout my farthest memory, I’ve never not been a Star Wars fan. The original trilogy was a huge part of my film education as a kid. I’ve written more about just how good The Empire Strikes Back is in my own mind and Return of the Jedi has some truly iconic moments, but A New Hope has just this wonderful balance of alien wonder and ancient themes of adventure and magic and good triumphing. In all, the original Star Wars films combine into one of the most perfect trilogies in film history.

But George Lucas is a very different filmmaker now. I guess we should have seen it coming with the first update to the original trilogy in the mid-90s, but it just seemed like such a small thing. Then came the prequels, a project with tons of potential that turned into… well, pure shit. But Lucas isn’t content to ruin just one series; we got to see him tarnish another great trilogy with Indiana Jones and the Kingdom of the Crystal Skull, which you can read about in my “Glutton for Punishment” birthday post last year. Spoiler alert: I didn’t like it. But let’s not forget the additional changes to the Star Wars Prequel in 2004. That update was best known for placing Hayden Christensen’s Anakin at the end of Return of the Jedi. Again, pretty damn painful for fans.

And now, George Lucas has put the entire series on BluRay and we’re worse off for it. It’s sad how slowly he eased into replacing the majority of his sci-fi opus with lesser versions of themselves. It went from sort of acceptable with the cleaning up the background to annoying to laughably frustrating to … something beyond ridiculous. For me, the last straw was finding out just how many weird choices Lucas made to the Blu Ray.

More than making this space epic into a laughing joke and ruining Darth Vader both in the prequels and in the additions to the original triology, George Lucas doesn’t understand that adding newer special effects to classics is an exercise in futility. We look past the sometimes silly special effects of the original series because the excellent story and characters suspend our disbelief, but the updates he made for the Blu Ray will never stay current – the 1997 special editions already look cheap.

I’ve heard a lot of devil’s advocates out there saying essentially, “It’s his movie, why do you care?” But here’s the thing: if a director or writer makes a really bad movie, you’re allowed to criticize it, whether you consider yourself a reviewer or not. Why is it suddenly faux pas to criticize Lucas when he is not only making bad movies, but making bad movies out of classic movies? I think we’re are allowed to get mad about this.

Here’s the sad thing. Not only did Lucas promise his fans during an American Cinematographer interview in 1997 that there would be only one set of special additions, but he also made a speech to Congress in 1988 speaking out about the destruction of film heritage through re-editing and updating. Yes, he was speaking more to film companies messing with other people’s art, but here’s a direct quote from that speech:

“People who alter or destroy works of art and our cultural heritage for profit or as an exercise of power are barbarians, and if the laws of the United States continue to condone this behavior, history will surely classify us as a barbaric society […] Today, engineers with their computers can add color to black-and-white movies, change the soundtrack, speed up the pace, and add or subtract material to the philosophical tastes of the copyright holder. Tomorrow, more advanced technology will be able to replace actors with “fresher faces,” or alter dialogue and change the movement of the actor’s lips to match.”

I’m not saying special editions are necessarily a negative. If he had only chosen to tastefully add deleted scenes to each of the films, even making sure that the deleted scenes are of the same quality as the rest of the original film, I would probably be alright with that. I would prefer to just have these scenes put as special features on a traditional series set, but it could be done tastefully. Sadly, with burping frog aliens and Darth Vader shouting during his once poingant betrayal of the Emperor and Hayden “I hate sand” Christensen replacing Sebastian Shaw at the end of Jedi and needless added explosions just for the sake of explosions … enough is enough, George. You’re not just making your movies worse … you’re making our favorite movies worse.