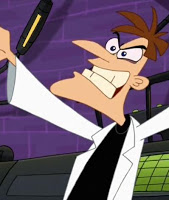 Ok, so it’s only going to be shown on the Disney Channel and released on DvD, but nevertheless, Phineas and Ferb are getting their full length feature movie! Rejoice!

I realize some of my readers don’t know about the show, so let me explain. This cartoon follows the epic summer days of Phineas and his step-brother Ferb as they make the very most out of their vacation by inventing a time machine, building a roller coaster, discovering a pirate’s treasure and becoming one-hit wonders (on purpose). And that was just the first season. Every episode, their sister Candace tries to bust them by showing their mom what they’ve been doing, only to have the evidence disappear in various ways. In the meantime, their pet platypus Perry shadows as a

secret agent and every episode he defeats his arch-nemesis, the not-so-sinister but very Germanic Dr. Doofenschmirtz (played to perfection by Dan Povenmire, one of the show’s creators).

There are plenty of running gags: Doofenschmirtz only recognizes Perry when he wears his fedora, the kids’ one-hit wonder can be heard as muzak in elevators and Ferb only has one or two lines an episode, but is played by British actor Thomas Sangster (best known as the adorable kid in Love Actually. Yes, that kid.). Creators Povenmire and Jeff Marsh are veterans of The Simpsons, Rocko’s Modern Life and Spongebob Squarepants, so you know it has tons of clever dialogue and pop culture references, including a particularly uncanny parody of the CSI: Miami opening credits.

There are few shows specifically created for kids that are also funny and smart enough for adults. Even though it could be called a special more than a movie, the announcement of a Phineas and Ferb movie makes me very happy. That being said, I’m all for a movie on the big screen. Are you listening, Disney?

For your enjoyment, here’s an episode of the show.