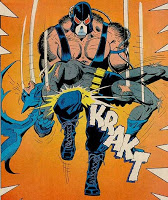 Something I’ve been itching to find out for more than two and a half years has finally been announced this week. The Dark Knight Rises villains, of course! Actually, we learned not only what villains would be in the film, but who would portray them. What does your friendly neighborhood fangirl think of these choices? Well, I’ll tell you!

First, we have Bane, the vicious, super intelligent and juiced-up crime lord who is best known for paralyzing the Caped Crusader in the 90s story Knightfall. Unfortunately, far too many people think of Bane as the voiceless, mindless thug from the abomination that is Batman and Robin. If you were lucky enough to not see that movie, you are lucky. To be honest, I didn’t know much about Bane up until this week. After doing a little research into the character’s history, this might be a better choice that I originally thought. After all, his chemically powered super strength and dependence on said chemicals isn’t too farfetched. It seems to be a smart fit for Nolan’s reality-based Gotham. Plus, the series is reportedly ending as a trilogy and considering Bane broke Batman’s spine in the comics… well, I wouldn’t be surprised if the trilogy ends on a dark note.

Second, we have Catwoman. This is the one I’m just thrilled about. Ever since seeing The Dark Knight in theaters, I had a very clear idea of what I wanted to see in the next film and Catwoman was on the top of the list. With Rachel dead, Selena Kyle and her alter ego seems a logical choice to full the role of love interest (a sassier, sexier love interest). Remember, The Dark Knight ends with Batman being classified a villain. Who better that our favorite feline-loving cat burglar to tempt the hero into being bad? I can just hear her now: “If you’re going to be condemned, you might as well have some fun with it!” And she’s one of the few Batman villains who doesn’t rely on supernatural or even too many over-the-top shenanigans to commit crimes (can you say “whip”?). More than anything, I really want this to be the sane, thieving Catwoman. No offense to Michelle Pfeiffer, but I never really liked the ubercrazy version of the character. It’s far more interesting for her to be completely to blame for her crimes. And she does have some ethics… just not the same as our hero’s. Anyway, I’m very happy they went with her. If she’s anything like she was in the 90s cartoon, it will be great.

So, who’s going to play these two heineous fiends? Well, Bane is being played by Tom Hardy, who you might remember as the clever and charming shapeshifter from Nolan’s Inception. I still giggle when I hear him say, “You mustn’t be afraid to dream a little bigger, darling.” He was a delight and after learning more about Bane’s history in the comics, I’m sure Hardy’s performance will be interesting, to say the least. No matter what, it’s going to be better than the silent neanderthal from Batman and Robin.

I’m a little more worried about Anne Hathaway, who is cast as Catwoman. Maybe it’s because I still remember her from way back in her Princess Diaries days and it’s hard for me to see her as a femme fatale. That being said, I think most of us thought, “Huh??” when we first heard about Heath Ledger as the Joker. Even if you didn’t love his performance as much as others, you have to admit he exceeded original expectations. I trust Nolan enough at this point to do justice not only to these iconic characters, but also his strong previous films.