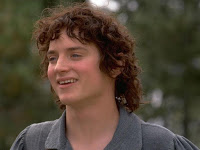 Almost three months ago, we learned that the wonderful Martin Freeman is playing Bilbo in The Hobbit, the prequel to the Lord of the Rings trilogy

. I still think that’s an excellent casting choice and I really can’t wait for them to get into production so we can see him all Hobbit-fied. Well, this weekend we’ve learned another bit of casting for the film: Elijah Wood reprising his role as Frodo Baggins. And I like this idea.

Now, before you call RetCon (Frodo isn’t born until after the events of The Hobbit, after all), I promise you this will work. In Fellowship of the Ring the film, Frodo tells Gandalf how much he used to enjoy listening to Bilbo talk about their adventures (“If you’re referring to the incident with the Dragon, I was barely involved.”). The Hobbit itself ends with Bilbo coming home from his grand adventure to a slew of greedy relatives –save his nephew, who liked listening to his stories. The article above has already confirmed that Frodo will be in the opening sequence of the film, most likely listening to Bilbo tell his tale as we flashback to the actual story of the film.

A couple reasons why this will work:
1). He’ll be a familiar face. Because it’s set years before the events of LoTR, there aren’t too many characters in both films. Bilbo will be there, but he’s played by a new actor. Gandalf and Gollum are there, but neither Ian McKellen nor Andy Serkis are confirmed to reprise their roles yet. Even when they are signed on, there are a whole slew of new characters that the casual audience member won’t know. Having the original trilogy’s protagonist open up the film (as long as it’s in a logical way) is clever.
2). We’ll get to see a great character again. We don’t really get to see Frodo happy and carefree after the first half of Fellowship. I think it will be a challenge for Wood to portray this character as he was pre-Ring, but it should be a real treat for fans.

LoTR fans, are you ok with the Wood casting? Would you even be up for a Sam, Merry or Pippin cameo in the opening?