Home  /  Movie News  /  Ian McKellen is OFFICIALLY IN The Hobbit 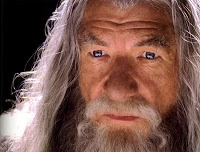 Just a couple days ago, news broke that Elijah Wood was reprising his role as Frodo in the opening scene of The Hobbit. At the time, I mentioned that it was still not known whether Sir Ian McKellen was coming back as the wizard Gandalf. Don’t worry, nerds of all ages; as of today, McKellen is in!

As far as casting goes, I think McKellen was the key to the film’s success. If anyone needed to be in a particular role, it’s him for Gandalf. He’s made that role his own and I don’t think I could see anyone else playing him in this prequel. It’s also going to be really good to see him be Gandalf the Grey again. Actually, I always loved the first couple chapters of The Hobbit for how Gandalf “convinces” Bilbo to go on the adventure and I can’t wait to see how McKellen takes on the scene.

We also found out that Andy Serkis will be reprising his role as Gollum. Gandalf and Gollum are the only two main characters found in both LoTR and The Hobbit (excluding Bilbo, who is more of a side character in LoTR), so I am very glad these two actors were brought on again. I know there’s still a long road ahead in this production (they start shooting on Valentine’s Day), but I am so very optimistic about this movie!

*I realized after writing this that The Hobbit is being split into two movies and I keep calling it one movie. Sorry, I’m just thinking of the two of them as one production.*