Home  /  Movie News  /  The State of the Arrested Development Movie 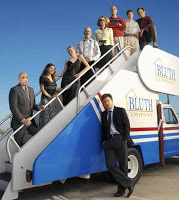 Readers who know me well understand my love for the FOX television series Arrested Development. The short-lived series (only three seasons even with several Emmy wins and high praise from critics and fans alike) focused on a man’s struggle to keep his dysfunctional family together after his father gets arrested for his corrupt business deals, but that synopsis really doesn’t do it justice. The show mastered the art of the running gag. For instance, I feel bad for any poor schmo named Steve Holt. It’s not easy to make one word into a catchphrase, but Arrested Development did with the word “her” (but only when said as a question). And thanks to the show, the chicken dance takes on a whole new meaning. While all the characters are amazingly funny (thanks to the talents of Jason Bateman, Portia de Rossi, Michael Cera, Jessica Walter, Tony Hale, Jeffery Tambor and more) no one is quite as special as Tobias, played by David Cross. A sample of Cross’ performance is below… NSFW, depending on where you work (and how well your boss understands double entendres).

Even though it was hinted at in the series finale, the Arrested Development movie has been in pre-production for a long time now. According to comingsoon.net, producer and series narrator Ron Howard has announced…. that he will not be directing. Which I already knew (or at least assumed) because series creator Mitch Hurwitz is the clear choice for director. But he also assured the interviewee that the movie will start production “soon”.
I honestly don’t doubt the film will be made. The passion of the writers, the actors and (maybe most importantly) the fans will push it to production. I think it’s just a matter of time and that’s what’s so frustrating. Some have questioned if we’ll get a good story considering how long it’s been since we last saw the Bluth family, but that doesn’t worry me. The writers were always adept at breaking the 4th wall and rebuilding it into jokes.
Share On