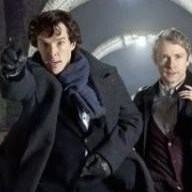 Well, this was something I wasn’t expecting, but man it is a fun discovery. During the BAFTA Awards earlier this month, The Hobbit‘s star Martin Freeman won in Best Drama for Sherlock

, the BBC modern adaptation of Sherlock Holmes. In the show, Freeman plays Dr. John Watson, with the dapper Benedict Cumberbatch as Holmes himself – if you haven’t seen the series, by the way, it’s fantastic. During the celebration, Freeman let something slip… namely, that Cumberbatch will be working with him on The Hobbit.

I feel bad for Freeman, because he was apparently not supposed to share that casting yet. He ended up remembering that, which is why he didn’t reveal Cumberbatch’s role (and it hasn’t been made official yet). I’d love to see him as Bard the Bowman, but no matter what, it would be great to see them on the big screen together. They have such great chemistry already, so whatever role Cumberbatch gets, I’m hoping he crosses paths with our reluctant hero Bilbo.

And good news for Sherlock fans… the show’s 2nd series will be filmed later this year. Considering the first series ended on one hell of a cliffhanger, I am very happy the 2nd series will be released sooner than later. I’m serious, if you didn’t check it out yet, go watch Sherlock right now – it’s on Netflix for those of you who have it.

In other Hobbit news, Steven Fry has joined the cast as the Master of Laketown. With such great actors joining the cast, I’m becoming more and more confident in this production.