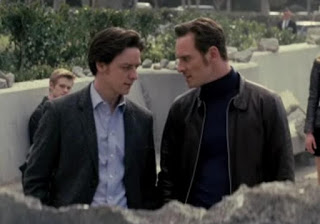 I know many of the superhero movies have let us down, particularly the last couple X-Men movies. X3 was a perfect example of wasted potential and bloated writing, and I didn’t even bring myself to watch the Wolverine prequel. But then the trailer for X-Men: First Class came out, and my natural nerdiness took over all reason. I physically squealed with delight. The new trailer that premiered has some of the same shots, but also some new bits that are sure to please the Marvel fans out there (well, those who aren’t too jaded from the Wolverine movie).

To be frank, much of my enthusiasm comes from the mancandy in this movie. I adored Michael Fassbender as the brooding Rochester in Jane Eyre, so I’m very excited to seeing him as another dark, frustated character. With sexy 60s sideburns, too!

I still think James McAvoy is also such a dreamboat (yeah, I’m using the vocabulary of a 1940s bobbysoxer, sorry), but its the chemistry between the two actors that really appeals to me in this trailer. We have these two powerful men, just beginning to learn the depths of their enormous power. Both men share so much, and like each other so much, but see two very different paths to redemption. They also both see the other as allies in their bright future, but only if it fits in their own plans, both rigid in their ideals. With the film set during the Cuban Missile Crisis, the personal struggles between the two men seem to parallel what is happening in the rest of the world. If they do this right, the movie could really bring something dynamic. I’m not saying it’s definitely going to be good, but I still have my hopes that this will be a bright light in the series.

I do worry a little about the female characters, especially the costume and makeup choices for them. I still think Emma Frost (January Jones) looks pretty stupid in a bad CGI-way when she goes all diamond-y. But I’m also worried about Mystique (Jennifer Lawrence) when she’s in her mutant form. It looks kind of goofy. However, I am looking forward to seeing Beast (Nicholas Hoult) get some. Yay smart guys getting some!