Home  /  Movie News  /  Christina Applegate will be in Anchorman 2 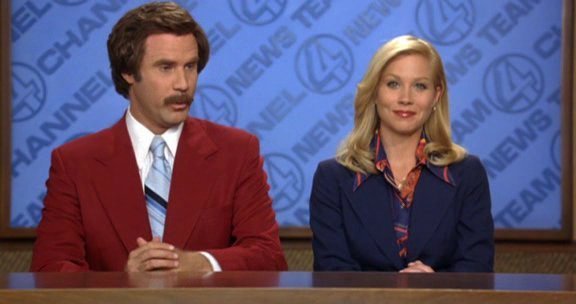 Last month, I anticipated good things to come after watching the Anchorman 2 teaser. Anchorman is just one of those movies you either really love or you just hate. I get that. A lot of my friends gave me the evil eye when I mentioned my excitement for the sequel. But I find the first movie to be absolutely hilarious and I’m looking forward to the potential this sequel has, even if we don’t know how good it will actually be until we see it. However, what was disconcerting while watching the trailer was the lack of Christina Applegate, who I thought brought everything together story-wise as Veronica Corningstone in the first movie. Without her hard-as-nails-but-still-charming-reporter-who-Burgandy-learns-to-love, it just would have been the four men going to get ice cream … no really, I’m pretty sure that would have been the entire story. Luckily for fans of her performance in the first movie, her co-star David Koechner let it slip that she was on board and Anchorman 2 director Adam McKay confirmed the casting. However, I’m still a little worried.

While the script is still being written, McKay did mention a potential custody battle as part of the story. Again, the strength of Anchorman compared to Will Ferrell and McKay’s other collaborations is that Veronica manages to walk the fine line between appealing female character with some dignity and female character who can actually pull off some jokes. That’s not easy thanks to how women are most often written in comedies like this (hint: not very well). No, they let Veronica be silly while not making her into the butt of the joke … heck, even when the male characters were trying to belittle her, they end up making themselves look much more ridiculous in the process.

So, while I don’t mind the idea of Veronica and Burgandy having relationship struggles, I just don’t want it to be the main thrust of the story or something that happens at the beginning of the story, which could keep Applegate’s role minimal. Of course, Applegate is still doing her NBC comedy Up All Night with sometimes-Ferrell-collaborator Will Arnett, so a minimal role might be in the cards whether we like it or not. I realize this is just a comedy and maybe I’m taking it too seriously, but even comedies need good chemistry and good cast dynamic. The original cast of Anchorman was so tight funny-wise that messing with the dynamic could unravel everything. In other words, don’t mess with a good thing. Anchorman 2 is slated to be released in 2013.