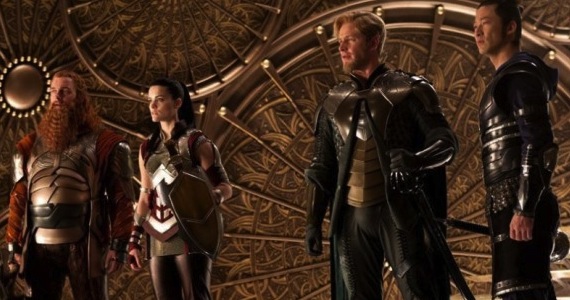 I’m still on an Avengers high from over a month ago. The movie is just that good. And with all the heroes going their separate ways, I’m looking forward to event the franchise that was good but not necessarily my favorite of the movies … including Thor. I didn’t mind Thor (and I liked the movie much more in subsequent viewings), but it’s the most uneven and sort of random of the Avenger universe movies. A lot of characters were introduced but not many of them were developed, especially the Warriors Three (and Sif). I get why … we needed to set up Thor’s arrogance and his eventually journey to maturity and wisdom, but in the meantime we have these four characters who are just kind of there. One of those characters is Fandral, the handsome Errol Flynn lookalike played by Joshua Davis. However, Davis will be busy in the next year with his hit show Once Upon a Time – which I enjoy – so he had to decline the sequel. Who are they getting to replace him? Well, rumor has it that it’ll be Zachary Levi.

I was never a huge Chuck fan, but I didn’t mind it or his character. I also think that he could certainly look the part of Fandral once they get the facial hair right. Apparently Levi was the original choice for Fandral but he wasn’t available due to Chuck’s extended third season, so the role went to Stuart Townsend and then ultimately to Davis. The filmmakers are obviously enthusiastic about Levi since they had considered him before.

What I really like about his potential casting (which hasn’t been confirmed just yet) is that he is a bigger name in the role. By putting a household name in a supporting role, it’s a sign that the character (and the other fellow warriors of Thor) will have a more substantial role in the story. I’d be very happy if Thor 2 was centered around Asgard with the Warriors 3 and Sif helping him protect against a new intergalactic foe, perhaps with Loki in a Hannibal Lector consulting-criminal-still-behind-bars role. I want to see more of their dynamic, especially now that Thor isn’t as much of a douche-nozzle. I’d love to also see more of Sif  … she was one of the only women in superhero movies these days that was actually bad-ass, respected and not overtly sexual (they actually gave her armor and didn’t show cleavage!), but that might just be because they didn’t give her many scenes.