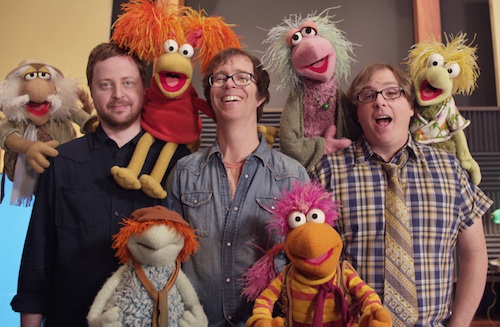 Isn’t it lovely when two things you like that seem very different come together and somehow totally work? I love moments like that. The world feels like a better place in moments like that. … The world feels like that to me right now actually, because Ben Folds Five and the Fraggles made a music video through the Nerdist. I repeat: Ben Folds Five. Fraggles. Music video. Every nerd that grew up in the 90s needs to watch this video. It’s like my childhood and my teenage years just came crashing together in a symphony of awesome, joy and puppetry.

Because while The Muppet Show will always be my favorite Henson TV production, I watched a lot of Fraggle Rock as a kid and any time they come back into the general consciousness is good is my book.

Ben Folds Five released a new album last week (the first in at least a decade I think), so this was obviously promotion for that … and it worked for me because I really like this song. The Fraggles helped of course, but I’m honestly thinking about snagging at least a digital version of the album.What can I say? I love lightening fast piano jamming.

Like I said, this is a must watch for Henson fans. If anything, the
ending sold it for me because … well, you’ll see. Check it
out. Oh, and Rob Corddry, Anna Kendrick and Chris Hardwick are also in the video. Don’t even ask why. It matters not. Just enjoy it. Enjoy it all.