Home  /  Movie Preview • PotterWatch  /  PotterWatch #4
Movie Preview, PotterWatch PotterWatch 1 Comment
PotterWatch is a special group of posts on Just Plain Something dedicated to a certain film franchise about a certain teenage wizard.
So, it turns out some very lucky fan is going to get a role in the very last Harry Potter film. Unfortunately, if you’re absolutely nowhere near London in the near future, that lucky fan won’t be you (that includes me). According to the BBC, Potter stars Evanna Lynch (Luna Lovegood) and Matthew Lewis (Neville Longbottom) released 1,000 balloons off the Millennium Bridge in London on Friday to promote the two upcoming movies. Each balloon has a code attached and those who find a code will be entered into the drawing to appear as one of the moving portraits in Hogwarts. Apparently, the winner will also get to take a tour of the set, which would also be really amazing. 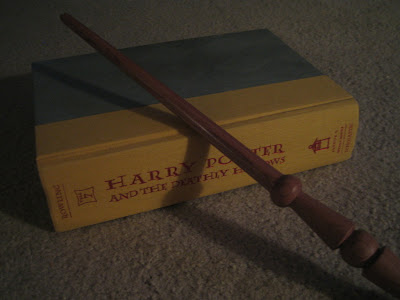 Besides needing to actually find one of these balloons, only those 18 years or older will be allowed to enter (which is pretty lame for the good bulk of Potter fans who are kids). Still, there is pretty much no chance that one of those balloons will fly 4,000 miles to me, so I don’t really get a chance, either.

Besides talking about the contest, Lynch also mentions that shooting the battle for Hogwarts will be saved until the end of production. Considering that the contest winner will probably be seen in that part of the movie, that means the filmmakers have plenty of time to choose a winner.