Maybe it’s because the Star Trek DVD released this week (yay!), but Star Trek 2 rumors have been running rampant lately. The one that interests me most is the suggestion that Kahn might be introduced in the next film. Many are worried that remaking such a strong character could be a mistake.

On one hand, this series is a reboot, so anything could happen. That means whoever they get to play Kahn (if they go that way) doesn’t have to act exactly like Ricardo Montalban. His motives don’t even have to be the same. And while Kahn is very iconic, so is the Joker and The Dark Knight is one of the best sequels ever made because they got the right actor and the right story. 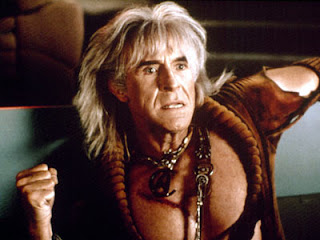 On the other hand, this Kahn would be introduced much earlier chronologically than in the original timeline. If he is in the next movie, is he already vengeful? Would the movie focus on how he becomes the spiteful villian we know and love to hate? Just how closely will his backstory relate to his original story? And even though the new actor wouldn’t have to be a clone of Montalban, can he do the character justice?

In case you didn’t check the link, IGN suggests Khan could be played by Nestor Cambell, who (surprise, surprise) played Gotham’s mayor in The Dark Knight. Since he does resemble Montalban more than a little bit, he could be a good choice. We’ll just have to see.