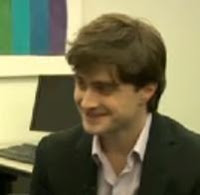 Movie Preview, PotterWatch PotterWatch 1 Comment
PotterWatch is a special group of posts on Just Plain Something dedicated to a certain film franchise about a certain teenage wizard.

It’s funny that even with my stressful life, trying to secure my career and finishing the last few months of school, I still keep myself updated on the last two HP movies. After searching through a few pages of news results, I discovered this interview Daniel Radcliffe did for MTV back in March. The first video is a short one, but it made me very gleeful for the epilogue. And isn’t it crazy to hear little Harry Potter use the phrase “my daughter”?

Next is Radcliffe’s thoughts on ending the series, which has been a huge part of his life over the last ten years.

The third video focuses on one particular scene in the last movie. Watch to see which one it is.

There are a few more parts of the interview that are non-HP related (including his charity work and his new-found appreciation of curling) and you can watch them all here. What impressed me about all the videos was not only that Daniel spoke eloquently (something you don’t always get when watching a celebrity interview), but he seemed really genuine. Isn’t that nice to see once in a while?

What was your favorite part of the interview? What would you have asked him?