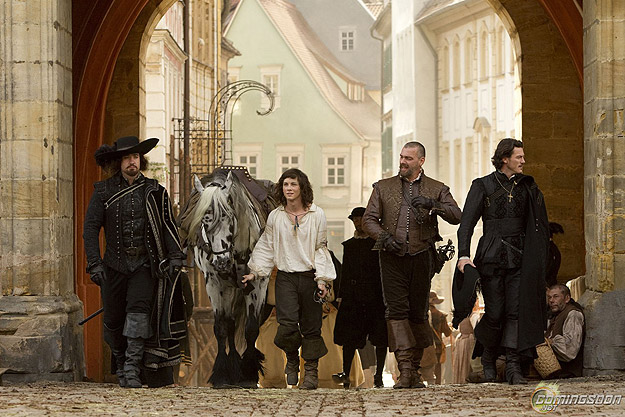 I might be the only person who actually liked Disney’s The Three Musketeers back in 1993. Granted, I was eight at the time, so that might have had something to do with it. And I didn’t know how ironic it was that Charlie Sheen played the religious Aramis. A few years later, I tried reading the book, but I never got through it. That being said, I always liked the overall story that I have picked up from the different interpretations I’ve seen. So I’m pretty excited to see what the 2011 version will look like.

I don’t recognize everyone in the cast, but Inglourious Basterds‘ Christoph Waltz looks like the perfect person to play Cardinal Richelieu. In addition to his awesome work in Death at a Funeral, Matthew MacFayden has already proven he can do literary characters justice with his performance as Mr. Darcy in 2005’s Pride and Prejudice, so I’m happy to see him on board as the somber Athos.

I think the choice of Logan Lerman will work as young and rebellious protagonist D’Artagnan. That being said, what is with his hair (he’s second person from the left in the picture above)? I know long hair was the style of the time, but its easily looks the most feminine of the four. On the other hand, Porthos (Ray Stephenson) seems to be sporting the Jason “I have a buzz-cut no matter what time period my character is in” Statham look.

The Three Musketeers is set to be released October 2011. Especially for fans of the novel, what do you think so far of the adaptation?