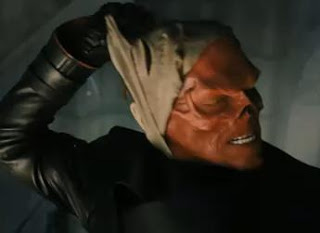 Well, if you watched the Super Bowl this past weekend, you probably already saw this video this weekend. Thanks to a lack of sleep and watching a particular exhasuting movie (which will be reviewed this week), I went to bed super early and missed the whole game and all the ads that went with it. Thanks to going to sleep early, I woke up super early on Monday morning and got caught up pretty quickly with all the different commercials… and the game of course.

If you were like me and didn’t watch the game, check out the first peek of Captain America.

This trailer is super short, so that isn’t much to saw about it other than it is pretty reminiscent of the Indiana Jones style as far as costumes (which makes sense, considering WWII).

Still, this trailer got me thinking. Captain America wasn’t really one of the superheroes I knew well as a kid. Looking at the trailer from what I know now about the character, I can’t help but think that his origin is a little sick. Normally a superhero gets his/her horrific powers from some evil organization or from good meaning scientists whose experiment goes awry. Captain America was created by the American Government, who knew exactly what they were doing. At the time the Cappin’ was created, this didn’t seem so sinister (fighting Nazis probably helped), but it’s kind of messed up. I have to wonder if contemporary audiences (especially fledgling comic book fans) will be able to relate to both him and to this version of our government. Will Captain America even be compelling as a person?

That being said, I still think the costume design for the Captain’s suit is stellar and the flash we saw of Red Skull looks seriously intimidating.

For fans of the Nazi-asskicker, what are your thoughts? Are you excited about the film? Are your worries the same as mine?