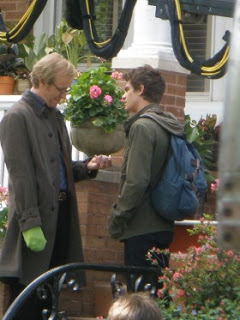 We have a bunch of Marvel movies coming out this summer. Between Thor, Captain America and X-Men: First Class, there’s a lot of Stan Lee-based goodness going on. Of course, we also have the Spiderman reboot in the mix. I mentioned  my initial thoughts on the reboot, but we’ve gotten three new photos from the set.

So, here we have Rhys Ifans as Dr. Curt Connors, Peter’s handless mentor whose experiments with limb regrowth turn him into the horrifying villain Lizard. I was excited to see Dylan Baker’s Dr. Connors turn into Lizard in the first Spiderman series, but with that series basically canceled to make room for this reboot, I’ll never get to see what Baker would have done with the character, which is disappointing. Still, Lizard is one of th emore complex villians in the Spiderman canon, and that will be great to finally watch on the big screen, no matter who is portraying him. But I’m not sure how Rhys Ifans will pull it off – his previous roles leaned toward silly rather than solemn. I mean, this man played Xenophilius Lovegood. Enough said. I find it interesting that they’re choosing to greenscreen his hand away, or will he already have his unnatural replacement by the time of this scene?

Here’s Peter with Gwen Stacy. It’s still odd to see Emma Stone as a blonde. I don’t know much about Ms. Stacy as a character… she was kind of thrown away in Spiderman 3

, and my history with Spiderman stems from the mostly Gwen-less cartoon

rather than the comics. From what I’ve heard, this scene is supposed to be after her father’s funeral and involves Gwen slapping Peter in anger.

So, I’m thinking this is Peter in his nerdy, pre-Spiderman glasses, but they look less nerdy and more “hipster.” I mean, does this look like a guy who can’t get a date? Super-impose a ironic pun on his shirt and he could be modeling apparel for Threadless. In comparison, Tobey Maguire’s Peter looked legitimately awkward. As much as I like Andrew Garfield, I’m not sure he’ll be convincing as a complete social outcast.

Someone who is looking to be great in this movie is Martin Sheen as Uncle Ben. I rewatched The Departed

recently and remembered why Martin is my favorite Sheen – as great as the other performances are in that film, Sheen is just perfect as DiCaprio’s kind, mortally straight-as-an-arrow father figure. It’s a perfect match for Uncle Ben. I also like that they are using a real New York neighborhood as the setting for Peter’s family home (although they’re filming in Brooklyn and the Parkers traditionally live in Queens).