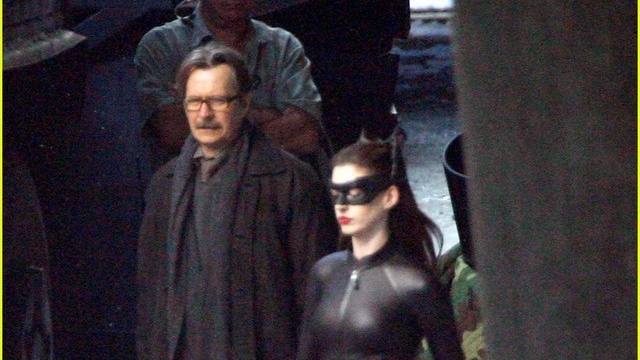 A while ago, I wrote about my faith in Christopher Nolan and his final Batman film. Sure, we weren’t positive that Selina Kyle would be Catwoman, but I really believed we wouldn’t be disappointed. We’ve gotten some new information, and so far I’m not disappointed!

I wondered just how realistic the Catwoman costume would be in Nolan’s world, but from what I can tell, it looks pretty straight-forward and even traditional. It actually reminds me a little of the 60s TV costumes … except the dated gold accessories are gone. I see this as a good thing. The photos we have might not look very impressive, but I keep reminding myself that these costumes are designed to look good on the big screen, not on personal cameras. Even the Batman costume (seen below) doesn’t look as impressive.

I’ve already heard rumblings saying the costume is too leather dominatrix, but come on – it’s Catwoman. While the super-high heels are a bit disappointing, the rest of the costumes seems to be a more functional version of the Catwoman costume. She’s even got a utility belt, which she’ll need since that thing does not have pockets! Catwoman is always going to wear a skin-tight black catsuit in some way or form, but this one doesn’t look so far off from the rest of Nolan’s Gotham. The only thing a little over-the-top is the set of ears, but when she didn’t have then the ears naysayers were bitching about her not looking like cat. In other words … make up your damn mind! Sheesh!