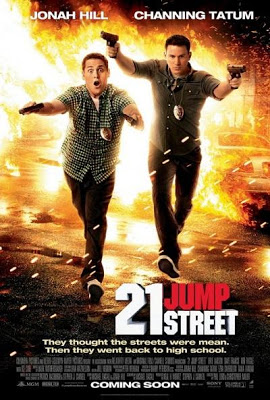 Is there no TV show that Hollywood won’t bastardize into a movie? Remember Charlie’s Angels? Remember Starsky and Hutch? Remember Miami Vice? Every year, it becomes more and more clear that the large majority of movie companies would rather turn out remakes of old stories than do anything original. I understand there’s money to be made in nostalgia, but I stop being understanding when the movies they turn out are crappy.

I’ve known for a while that there is going to be a 21 Jump Street movie. I’ve also known that it is going to star a slimmed down Jonah Hill. I wasn’t sure how much it was going to be a good representation of the original television series. From the poster alone … I’m not holding my breath.

Correct me if I’m wrong (I’ve only seen bits and pieces of the show), but 21 Jump Street didn’t have huge explosions, did it? Wasn’t it more about stopping high-schoolers from doing drugs by stopping the local drug dealers and stuff like that? If you took away the title, I couldn’t even guess that this is an adaptation of the old show. This looks like the poster for The Other Guys, but The Other Guys was in on the joke. The poster just screams of trying too hard and I suspect the movie will, too.

I’m not against the idea of remaking a popular story, I just ask that they represent the spirit of the original. By the by, have you seen Sherlock yet? It’s beautiful written modern adaptation that miraculously stays true to the novels. The 2nd series is coming to PBS in the spring for the US, so watch that instead of this movie.