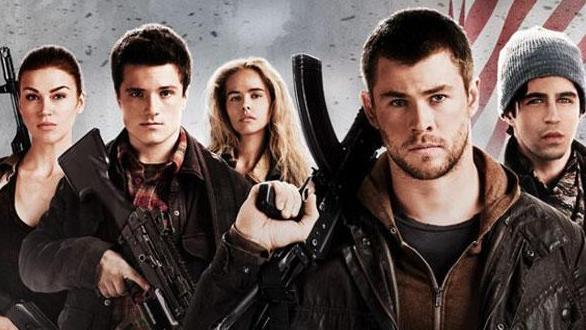 For some reason, Looper had quite a few stupid trailers attached to it. There were no less than three crappy looking horror movies (including the very 3D new Silent Hill movie), a silly inspirational surfer movie and a few others. But the one that had me laughing throughout was easily Red Dawn. When I realized what it was I immediately started whispering, “AVENGE ME! AVENGE ME!” into my boyfriend’s ear. Maybe it’s different for people who grew up loving the movie, especially for people who grew up in the mid-80s, but this was just silly. Check it out.


First I find it very funny that it’s heavily implied that Chris Hemsworth is supposed to be college-aged and on leave from the Marines. Hemsworth is almost 30, for crying out loud. I mean, I know he played a college student in Cabin in the Woods, but that was put on hold for release for a few years. Now it just seems silly to have him playing a character anywhere close to 20. And every time I saw the kid from Drake and Josh I couldn’t get it out of my head that it’s the kid from Drake and Josh. Oh, and hey Peeta!

I was actually convinced that it was supposed to be China that was invading since they really didn’t say and considering Russia and China have that Cold War connection. It turns out that it’s North Korea. I guess that makes a little more sense since we’re sort of trying to be almost allies with China, but aren’t we past this “our enemy is super-dooper evil” sort of storytelling? … I don’t know why I even ask that since the other trailer before Looper was the Osama Bin Laden assassination movie, which I’m sure will have a very niche audience in the “USA! USA!” chanting variety. Red Dawn‘s trailer alone has so much national propaganda that even a moderate like me starts rolling her eyes. You can actually see a hint of the American flag in the shot establishing the Korean forces invading. Symbolism, anyone? Anyone? It had so much forced patriotism that the only reason I knew Michael Bay didn’t write this was because there weren’t enough explosions (and yet it does have the pants-less, personality-less love interest from Transformers 3).

Look, maybe it’ll be a decent action movie. Maybe. But when you can imagine “America, Fuck Yeah” seamlessly playing in the background of a trailer and it isn’t a parody,I seriously doubt it.