I had difficulty working on this review. For one, Harry Potter and the Half-Blood Prince is one of my favorite books in the series. Second, this is the first Harry Potter movie I’ve watched for the first time after rereading the series, so the book is fresh in my mind. And while there is no way you can completely forget about the source material when watching a film like this, I understand that to complain about every change won’t do me any good. Therefore, I solemnly swear that I will not nitpick nearly as much as I feel compelled to and will try to not give away spoilers (but let’s face it; if you don’t know how this movie ends by now, I don’t think you live on the planet Earth).

The movie begins where Order of the Phoenix left; Sirius Black has been killed and all eyes are on Harry (Daniel Radcliffe). The good news? The wizarding world has finally acknowledged that Voldemort is indeed returning to power. The bad news? Voldemort is returning to power. We see the first signs of the chaos to come in the attack of Diagon Alley, the kidnapping of wandmaker Ollivander (a critical plot point in the next book) and the attack on a muggle bridge. I loved the scene being shot mainly as the POV of the Death Eaters. They swoop in on London and blast through the entrance of Diagon Alley in a really visually superb way (you want to see this on the big screen). The destruction of the bridge was actually ho-hum in particular. Perhaps I wasn’t as impressed because a good portion of the marketing of the film has been devoted to “They blow up the bridge” and it just didn’t stand up to the hype. 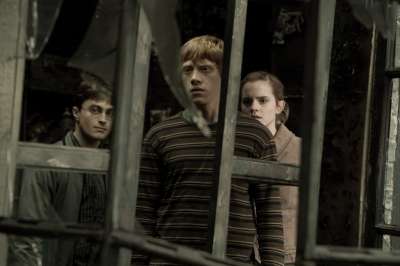 There is a TON of focus on Ron (Rupert Grint) and Hermoine (Emma Watson), which bothered me. While I have always been a Ron/Hermoine shipper, even in Sorcerer’s Stone, the filmmakers went just a little too fast in bringing them together. In the middle of the film, Hermoine confesses to Harry that she’s pretty much crazy for Ron, while she originally doesn’t even let herself accept that until Deathly Hallows. I kept thinking, “They have two more movies to go. How are they going to stretch this out?” In contrast, I don’t think they give us enough Harry and Ginny (Bonnie Wright). Lots of tension, but not a lot else. The filmmakers decided to completely change their “kissing scene” from something passionate to something secret and quiet. You don’t get to see them happy together and that just doesn’t work for me. (As a side note, they never really establish when Ginny and Dean break up and it bothered me that Dean didn’t even get a line in the film).

The characters are overall spot on. Lupin (David Thewlis) and Tonks (Natalia Tena) are already together in the film adaptation, but it works. Tonks is more somber in this one, but in Tena’s small part we are able to see her devotion to him. Luna (Evanna Lynch) is just as “off”, if not slightly more social, as she was in the last film. Her addition to the train scene is one of the best changes made from book to screen. I was glad to see Malfoy was expanded as a character. Until now (in both films and books), Draco was pretty much just the pompous bastard (or the stupid git, if you’re Ron). But in Half-Blood Prince, Draco shows us that he might still be a pompous bastard, but he’s not evil by any means. Even Harry recognizes that. And Tom Felton shows that vulnerability (and humanity) very well.

What I’m most grateful for are the little (non-plot related) details they kept in. While there are plenty there, I think my favorite is when Harry and Dumbledore (Michael Gambon) are about to leave Slughorn’s hideout and Dumbledore asks to keep the muggles’ knitting magazine. “I just love the patterns,” he says with a cheeriness. It’s just a great line and I was so happy it made it in the movie. And there was a moment only found in the movie (a story Slughorn tells Harry about his mother) that made me wish Rowling had written it.

Perhaps what this movie has going for it more than anything is the expansion of the settings. The last time we got to look into the Weasley’s home was in Chamber of Secrets, so it was a treat for the audience to get to see more of the layout of the home (although the attack on the house was one of the things I disliked the most about this movie). And while we’ve seen plenty of Hogwarts in the five previous movies, the school really comes to life in this one. The whole wizarding world never felt more real.

And while there were some scenes that felt off, there were a few scenes that were really close to perfect. Quidditch was actually kind of fun (it helped that you see a student get clipped by a goal post ala Titanic). The oath scene and the Weasley’s store were both great and the cave scene was beautiful in a horrific way. To see Dumbledore, frail and crying, is something truly disturbing, but moving at the same time. Still, the best scene, hands down, is in the astronomy tower. For those who have read Deathly Hallows, the characters’ motives shine through while still keeping it a mystery for those who haven’t read the last book. Snape (Alan Rickman) was awesome, not just in that scene but altogether. His dry, slow drone is so delicious and has really helped shape the character. Helena Bonham Carter plays Bellatrix uber-crazy (she also doesn’t respect the personal space of other characters, particularly Snape and her nephew). And Maggie Smith is not only awesome, she gives one of my favorite Iines of any of the movies, “Why is it, whenever anything happens, it is always you three?”

Overall: While some of the changes seem pointless, the movie is visually beautiful, emotionally moving and moves us fluidly toward the end of Harry’s story.