When I found out Henry Selick, director of Nightmare before Christmas, was making another stop-motion film, I was very excited. After seeing this movie in theaters a few months ago, I was glad to see my excitement was well deserved. Now that I’ve watched Coraline on DVD (this time, without the 3-D), I am still a really big fan of this movie.

Based on the book by Neil Gaiman, youngster Coraline (Dakota Fanning) is bored in her new home. Her neighbors are weird and old and the only other kid around bugs her. Most importantly, her parents are too busy finishing their garden catalog to spend time with her in their actual garden. But soon she finds a magical door that takes her to a better version of the world, where her neighbors are youthful and talented, her father is vibrant and sings and dances and her mother is beautiful and fixes her favorite foods. It doesn’t take Coraline long to become infatuated with this other world and it’s “Other Mother”. But she slowly starts to realize that things might not be as perfect as they seem and it is up to her to fix things.

Above all, the animation in this movie is brilliant. While there is some CGI, the big majority of this film is stop-motion, which mean every set and every character had to be made by hand, all in miniature. The attention to detail is truly profound. For example, they actually had a woman micro knit every sweater Coraline wears. Each set is so interesting to look at and you can see why Coraline is so easily tempted by the dreamworld. Like I mentioned before, there is CGI, but it is only used in very specific cases and blends well. Because it depends on stop-motion more than anything, the film doesn’t feel over-worked and there is a real organicness to both worlds. 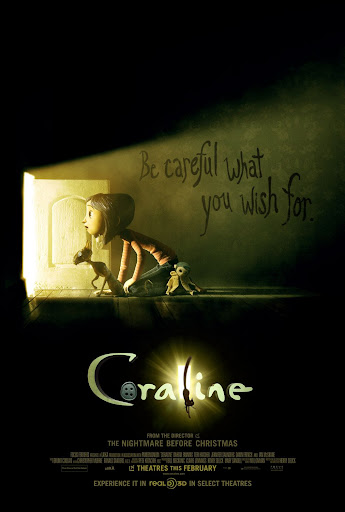 In addition to the special effects, I was thoroughly impressed with the voice acting and the characters themselves. I like that they don’t make Coraline perfect. Truth be told, she can act pretty bratty at times and she isn’t always nice, but she is also more-or-less a good person who finds her way. Teri Hatcher plays both her real mom and the Other Mother and it’s great to see her do two very different character that essentially represent the same person. She also plays the real mom very realistically. It’s not that the mom is trying to ignore her daughter, but like so many modern parents, she’s stretched too thin and is just trying to get by. You can tell she really does love Coraline and their relationship is just going through a tough time. That aspect gives the movie so much more depth than if they just made her a mean mom. Dad and Other Dad are played by John Hodgman (of Mac commercial fame) and gives both characters a lot of sweet goofiness (his song at the piano is one of my favorite parts).

The minor characters are also really great. Ian McShane blows it out of the water as Mr. Bobinsky, Coraline’s eastern European acrobatic neighbor who is determined to train his mice to perform in chorus. The cat who tries to warn Coraline of the other world (played by velvet-voiced Keith David) has a very Cheshire Cat feel to him that adds to the dark, chilling mystery. And even though neighborhood kid Wybie (Robert Bailey Jr.) was not in the original story, he fits in well and doesn’t feel forced. Besides the voiced characters, the mice of Bobinsky and the Scottie dogs that live downstairs are such treats to watch.

This is really a near perfect kids’ film. It gives the right message to kids and parents alike: appreciate the family and the life you have. Sure, it’s dark and scary, but I think 8 year-olds or older should be fine (a good test: if they can watch Nightmare before Christmas and be OK, then they can watch Coraline). In fact, the only thing that truly makes this a PG movie for me isn’t the scary scenes, but a scene involving the two elderly neighbors where just too much bosom is exposed. It’s not a deal breaker by any means, but it’s probably the one scene that I didn’t fully enjoy.

Overall: The style is beautiful and the story is such a great lesson for kids. Done in a fun, dynamic way while still appealing to adults, Coraline is destined to be a classic childrens’ movie.