For many years, I refused to watch this movie. So many of my peers (mostly female) were overly obsessed with the film and I stayed away from it based for the most part on principle (and my steady dislike of the movie’s theme). The closest I came to seeing it was around 2000, when my aunt and cousins made me watch the last hour or so. Then, just a few days ago, my boyfriend (that’s right, my boyfriend) forced me to watch it. I admit, I enjoyed it more than I predicted, but I still don’t think it is worth the hype it received 12 years ago.

American debutante Rose (Kate Winslet) and scruffy artist Jack (Leonardo DiCaprio) meet on a beautiful luxury ship and fall madly in love. The problem? Rose is engaged to a vicious millionaire and the ship they are on happens to the Titanic, which has too few lifeboats and is heading straight for an iceberg. Truth be told, the movie has it’s good qualities. The chemistry between Winslet and DiCaprio is strong. They play off each other very well. Unlike many movie romances, it’s actually pretty believable that they would fall so recklessly for each other in such a small time (especially considering Rose’s desperation for freedom and a compatible partner). There are only a couple of scenes between the two of them that I found actually annoying. One that comes especially to mind is the spitting scene. When Jack tells Rose to “hawk” the loogie, I couldn’t help but think, “This movie won an Oscar?” And I understand it was supposed to represent Rose becoming more comfortable and relating to Jack, but it didn’t work for me. 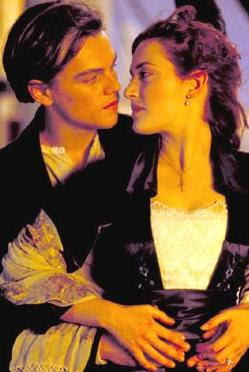 I will say that Winslett helps create something we don’t get to see very often in cinema- a truly relatable upper-class young woman. She rarely seems pompous or snarky (except maybe when she first sees Titanic) and when she explains why she hates the life chosen for her, I didn’t feel like she was over exaggerating. I really did pity the character. Winslet has proven to me before that she is an accomplished actress and she really pulls it off here. DiCaprio doesn’t pull off his character quite as well. To be honest, Jack is more than a little cliched and his dialogue is often the problem. That being said, you still end up liking him and he works best when he’s playing off of Winslett’s Rose.

Billy Zane plays the villainous fiancee way too over-the-top. I understand this is necessary in some ways (to show why Rose needs Jack so badly and how trapped she is in her relationship), but by the second half of the movie, you’re waiting for him to grow a Snidely Whiplash moustache and cackle menacingly. I was also distracted by his apparent eyeliner. Victor Garber plays Thomas Andrews, the designer of the ship who, perhaps more than anyone, feels the heavy guilt of the tragedy. Kathy Bates does a nice job as the famous Molly Brown, but I was disappointed that they don’t show more of Brown rousing the boats to look for survivors (there is only one small scene and it implies that the crew didn’t listen to her).

I was actually pretty disappointed with Gloria Stuart who plays the elderly Rose. She didn’t have Winslett’s spark and it completely took me out of the movie. In fact, the scene involving older Rose and the necklace was easily the silliest part of the movie for me personally. Then there is Jack’s Italian friend (played by Danny Nucci) who just reminds me of Luigi from the Simpsons.

I do admire the film’s honesty about what happened during the last night at sea. Director James Cameron is brave enough to show children, mothers, fathers and the elderly dieing slowly from drowning, freezing and more. Let me put it this way; when a bullet in the head is the most agreeable way to die, you’re in a very bad situation. And Cameron makes sure that the audience understands that it was all avoidable if those in charge made better choices. You get a real sense of just how bad this disaster was and just how terrible the survival rate was. Still, the fictional romance takes up so much of the movie, it also takes away a bit from the audience’s comprehension of the actual disaster. It can be compared a little to 2001’s Pearl Harbor in that way, although Titanic is a much more credible film. But how is it that Jack and Rose are always around when important members of the ship are having important conversations about the ship?

Overall: It might lean toward cheesiness from time to time, but it’s an emotional and mostly accurate representation of the infamous voyage with a decent fictional romance mixed in.

Leave a Reply to B. Cancel reply