Home  /  Movie Review  /  Review: Dirty Rotten Scoundrels
Movie Review comedy, Dirty Rotten Scoundrels, Frank Oz, Michael Caine, Reviews, Steve Martin 2 Comments
We all have our limitations, Freddy. Fortunately, I discovered that taste and style were commodities that people desired. Freddy, what I am saying is: know your limitations. You are a moron.
-Lawrence Jamieson
Because the 80s were a plethora of solid comedies, movies like this one can easily get forgotten. I’ve been told multiple times that this movie is worth watching. Now that I’ve finally seen Dirty Rotten Scoundrels, I can honestly say it’s one of the funniest movies of its time. 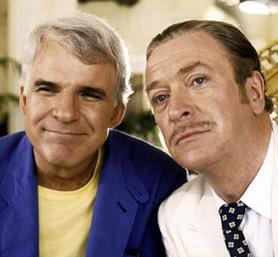 Lawrence Jamieson (Michael Caine) is a sophisticated conman. He convinces unsuspecting rich women that he is an overthrown prince who is helping his country’s freedom fighters take back control. These captivated heiresses practically beg him to take what they can give to the cause. He “reluctantly” takes their charity, if only “for the children”. Freddy Benson (Steve Martin) is a not-so-sophisticated conman. He gives women an overly rehearsed story about his desperately ill grandmother and how expensive the “operation” would be. He’s lucky if they give him $20 and a nice meal. When he makes his way to Lawrence’s home on the Riviera, Freddy beseeches “Larry” to teach him the ways of the high class con-man. But when Freddy gets tired of playing second fiddle, the two men make a wager: the first to con $50,000 out of Ms. Janet Colgate (“the American Soup Queen”) gets to stay. The loser leaves the Riviera forever.

This is a great, great comedy. The writing is witty, but always leads the audience at the right pace. The plot is a familiar one, but has some great twists and turns. The energy of this film is great and is consistent throughout the whole picture (thanks in great part to the always fantastic direction of Frank Oz). What works best is that the film never goes too over-the-top. It gets a little zany here and there (Caine and Martin pose as German and crippled, respectively), but their marks’ gulibility is still just believable.

Caine and Martin are both really spot on in this film and work beautifully together. There is a delightful chemistry that looks effortless. Lawrence is calm and collected, but also more than willing to cause Freddy misery, even when still in character. Lawrence is technically the straight man in this comedic duo, but Caine keeps him far from boring in his own right. And Martin is great as the goofy Freddy. He’s crass, uncultured and loud, all in the funniest ways. When he’s playing innocent with the mark, his whole body just lights up and you can’t help but crack up. The montage of Freddy being taught to be a gentlemen is a hilarious one, with Martin just doing an extreme imitation of Caine’s Lawrence… and failing. Glenne Headly does a stand up job as Janet, the mark of their bet. It’s hard to keep your own when working beside two great actors playing two great characters, but Headly does it with ease. Her contant trust in the two of them makes their ruse seem probable in a real life scenerio. Some other shining roles were from the other conned women, all of whom were proud to help such a “good cause” and most of whom never catch onto the con.

Perhaps the only faltering point of this movie is the infamous scene where Freddy pretends to be the “challenged” brother of Lawrence’s pretend prince. Don’t get me wrong, it is extremely funny (Martin gets to let loose and do those silly faces he’s so good at), but it’s a little too lowbrow compared to the rest of the movie.

Overall: Smart, well-paced and far from stuffy, Martin and Caine make Dirty Rotten Scoundrels a must see film for those who love to laugh.