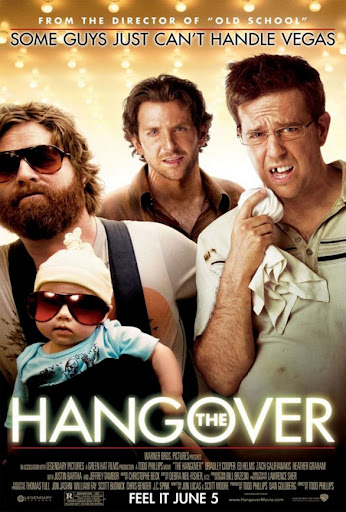 The problem I often have with “guy comedies” is that it’s very easy to make it so raunchy and nudity-filled that it’s a turnoff to even the coolest of girlfriends (I’m thinking of the American Pie straight-to-DVD spin-offs). When I first heard about The Hangover, I did assume that a movie about a bachelor party in Las Vegas would be full of those kind of turnoffs. I am happy to say I was mistaken.

Doug (Justin Bartha) is getting married, but before he does, he’s driving to Vegas with his two best friends (Ed Helms and Bradley Cooper) and his “unique” future brother-in-law (Zach Galifianakis). Right after they toast to the success of the night, things start to get fuzzy. So fuzzy, in fact, that when they wake up to a disheveled hotel room, a baby in the closet and a tiger in the bathroom, they have absolutely no memory of what happened. What’s more, the groom is nowhere to be found. The remaining three groomsmen must retrace their very foggy steps before the wedding (in 24 hours). Unfortunately, they quickly realize that they got into a lot more trouble than they expected.

There are some great smaller roles in this movie. The most infamous is easily Mike Tyson playing… Mike Tyson. In particular, he’s playing a fairly cordial, Phil Collins-loving Mike Tyson. This might be the most popular Tyson has been since, well, before the spousal abuse and the… ear biting. It’s a great case of an over-the-top celebrity poking fun at himself and it working to a T. Rachael Harris is awesome as Ed Helm’s cheating, controlling, borderline cruel girlfriend. On the other side, Heather Graham is surprisingly sweet and genuine as Jade, the stripper/hooker (yes both) that Ed Helm’s character marries during all the debauchery. She comes off as relatable and a much better alternative to Harris’ character. Ken Jeong carefully walks the line between inappropriate and just plain funny as Mr. Chow, the very naked kidnapped Asian crime boss. And Jeffrey Tambor has a fantastic little role as Doug’s future father-in-law.

The gems of this film are the main characters. Helms is great as the neurotic Stu (who wakes up with a missing tooth). His tiger-soothing ballad is featured at the top of this review and is one of the best moments of the movie. Bradley Cooper holds his own as the libertine, uninhibited Phil who finds most of their crazy day-after discoveries to be more funny than terrible. Galifianakis is probably the most laugh-out-loud funny as Alan, who is definitely weird and yet kind of lovable. I’ve seen his stand-up before and this role has that same bizarre energy, but it fits with the craziness of the plot. Probably the most challenging role was Doug, who isn’t in the movie nearly as much the other three. In the short time he is on screen, Justin Bartha is able to form a likable character and make the audience want to find out what happened to him. Most importantly, the four guys have a great chemistry together and (while this is still a goofy comedy) you get to see them grow closer as friends and that’s really cool. The pacing of the film is really strong as well and the soundtrack fits like a glove.

There are some extremely funny credits where you get to see the photos from that insane night. But while those couple minutes are hilarious, they don’t leave much at all to the imagination and I liked it when they left it to the imagination. To be honest, anything they could come up with wasn’t nearly as nuts as what the audience imagined. I ended up missing the mystery.