In the first thirty seconds of The Invention of Lying

, Ricky Gervais (writer, director and star of this film) is not only poking fun, but full out mocking the opening credits. I wouldn’t expect anything less of the creator of BBC’s The Office

, but the movie that followed was definitely a step out of the man’s comfort zone, in a good way.

The setup is a bit grand, but fairly simple: the movie is set in a world where no one lies or understand what lying is. It also means that religion doesn’t exist (because belief doesn’t exist in a world of strictly facts) and movies in this world feature one “actor” plainly stating only historically accurate facts. In fact, people not only tell the truth, but state openly almost everything they’re thinking and feeling at any moment (a date will tell you if she’s not attracted to you and the waiter will freely admit to trying some of your food). And in this world, Mark Bellison (Gervais) is a very unhappy, lonely man. But the same day he’s fired from his dead end job and rejected by the woman of his dreams (Jennifer Garner), something in his brain clicks and he discovers he can lie. Except he doesn’t know what lying is, he just knows he can say things that… aren’t. Since no one else in the world can even comprehend anything besides the truth, Mark’s lies (even the most outrageous) are automatically taken as truth by all who hear them. Suddenly, he realizes he can shape his life to be what he wants, not what others expect of him. 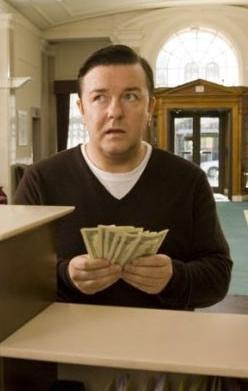 To be quite honest, I was worried that the main plot point and the novelty of this “honest” world would be milked to the point of annoyance and any character development would be an after thought. However, as the movie progressed, I found that it became more about the characters and less about “look how crazy this world is”. This is the first time I’ve ever seen Gervais play a relatable, likable character and the film is better for it. After testing out his new ability by seeing if he could get a random woman into bed (although he doesn’t go through with it) and winning a fortune at a casino, he then chooses to make the world better for the people around him by telling little white lies. Among the people he helps is his suicidal neighbor (Jonah Hill), who after being told by Mark that he will find someone wonderful and will end up very happy, suddenly realizes he doesn’t have to keep trying to kill himself. The great thing about the character of Mark is that he finds just as much happiness in changing the lives of people around him as he does changing his own life for the better. His lies are less about deception and more about changing the world into what he wants it to be. Even when his lies start to pile up, it starts with a lie said to help someone he cares about. Of all of Gervais’ characters in his career so far, Mark is the one you can feel most invested in and you really do want to see him happy.

Jennifer Garner has probably the most difficult role in this movie as Anna. One of the main plot points of the movie is that, in this world, people are very strictly classified by how they look. You are either attractive and therefore worth something or you are unattractive and therefore never worth enough. Within the first 20 minutes of the film, Anna tells Mark that while he seems nice, she would never actually be with him because they would have very ugly children. Because she says whatever is on her mind like everyone else, she stresses his unappealing physical qualities often. At the same time, Garner keeps Anna charming, innocent and sweet.

The supporting characters are many, but there are some great performances here. Louis C.K. is great as Mark’s goofy best friend and Jeffrey Tambor is kind of adorable as Mark’s boss who can’t handle confrontations. What’s interesting about Rob Lowe as Brad, Mark’s professional and romantic rival is that Lowe is basically just playing his character from Wayne’s World except that he doesn’t hide his treachery. He outright tells Anna that he is mostly just using her to get to Mark and I have to admit, Lowe makes a fun villain even when he can’t lie. It’s also great to see him frustrated by Mark’s sudden success while Brad is so obviously the better specimen. Tina Fey is just so-so as Mark’s secretary who openly loathes him. It seemed like she was phoning it in and I wasn’t sure why she was billed so high when her character is only in a couple scenes. Christopher Guest is also in the film, but it didn’t feel like he was used very well. His character is barely in it and I have to wonder if there were funnier moments with him that were cut out for time. There were also some really brilliant cameos. I won’t spoil all of them, but one of the best hands down was Jimmi Simpson (best known for his role on It’s Always Sunny in Philadelphia) as Bob, the bland, frank Coca Cola spokesperson. Another great one is Phillip Seymour Hoffman as the bartender that Mark first tests some lies on (which is one of the funniest scenes in the movie, by the way). You can also see The Office‘s co-creator Stephen Merchant in a flashback. And look for another Arrested Development

There are a couple main themes in this movie. One of them is religion, which Mark accidentally introduces into this world. He lies to someone on their deathbed and says he knows that there is an afterlife where “everyone gets their own mansions and everyone you loved is there”. The problem is that he was overheard and soon the whole world believes he is some kind of prophet. I didn’t see this as an insult to people of faith as much as a bit of a jab at those who rely too much on such a prophet. There is a great scene where Mark is forced to give the world his own version of the ten commandments and it doesn’t go quite according to plan (and it is hysterical).

The other main theme is that this world is divided into the “attractive” and the “unattractive”. It’s obviously an exaggeration of our own society, but it still reflects how we can act to each other, even if it’s over-the-top. One of the reasons why Anna’s character works despite her flaws is that she slowly starts to understand that the world isn’t black and white and there are more important things in a partner than their genetic material. I ended up feeling very moved by the movie because of this aspect.

The first thirty minutes or so were very slow to me. Some of the beginning was funny, but I was just waiting for Mark to discover lying. Once that happened, there was a better dynamic throughout the rest of the film. Even though the “honest world” premise worked better than I had expected, here and there it was a little less believable. There were few laugh out loud moments, but I found myself enjoying the film more thoroghly than many “laugh out loud” comedies I’ve seen. It isn’t a comedy for everyone, but those who get it will like it a lot.

Overall: A comedy that gives just as much character development and genuine emotion as it does laughs, The Invention of Lying is new ground for Gervais and I’m glad he took the chance.