I am directly below enemy scrotum.

To begin with, that is an actual quote. Towards the end of the film, John Turturro is right under the main Decepticon and the robot has a “truck nutz”-like apparatus between it’s legs. Hence the quote. Believe it or not, this quote best sums up Transformers: Rise of the Fallen as a whole.

The last movie left us with the evil Megatron killed, the Earth saved and high school student Sam Witwicky (Shia LeBeouf) winning the girl (Megan Fox) and getting to keep his very own car/robot guardian. Now, the Decepticons have somehow resurrected Megatron and are after college-bound Sam, who has inadvertently absorbed the information that could destroy the earth… again. Confused? Yeah, it’s worse when you’re actually watching the movie.

The plot starts to make less and less sense and there are several continuity errors. There are times when it cuts to different countries on different continents, but it’s the same time of day everywhere. The main characters were teleported from Washington DC to Egypt and the sun is shining in both places. I can understand teleportation in this kind of movie, but I don’t think Michael Bay understands how the Earth’s rotation works. The Great Pyramids are also featured greatly in the film, but the characters specifically state that they are at the Gulf of Aqaba, when it’s common knowledge that the Pyramids are at Giza. It just feels like lazy writing to make such a terrible mistake. Even though Sam’s guardian regained his voice at the end of the first film, they apparently forgot about that and reverted him back to a mute (they can’t even keep the stuff they made up straight). Also, apparently transformers can be anything now, because one is disguised as a human girl (which gets really creepy when you see her robotic tail… ew).

Sam’s parents were pretty annoying in the first film, but the filmmakers somehow made them more annoying in this. When they take Sam to college, his mom finds and eats a pot brownie within two minutes of arriving. It’s an incredibly awful stereotype of the naive, high white woman, made only worse by the fact that she was acting (if you can call it acting) more like she was drunk than high. Even when sober, the parents are cliched down to the dad swearing to turn Sam’s bedroom into a rec room and the mom spitting out snails during their trip to Paris.

Sam might be the most unappreciative character I’ve ever seen. Early in the movie, Sam is being attacked and yells for Bumblebee (the aforementioned transformer guardian) to help him. Three seconds after the threat is averted, Sam yells at Bumblebee to get into the garage before someone sees him. He then complains about how hard it is to have him for a car. He has a robot car! I’m pretty sure it’s the dream of every boy in America to have a car-robot hybrid that loves him. He also can’t tell his girlfriend he loves her (which might be the biggest cliche of all). I really don’t find Megan Fox very attractive, but the idea is that she’s supposed to be out of his league, and yet he can’t commit. In fact, he finds himself in the arms of another girl in the first week of college. Honestly, I have no sympathy at all for the guy.

An addition to the cast is Ramon Rodriguez as Sam’s roommate. This character is just plain awful. He makes Sam look likable (well, more likable). He is cocky and yet extremely cowardly, while still finding time to make a really overused joke here or there. As I said before, Turtorro reprises his role and it’s pretty much as bad as the last film, except this time we see him in a thong… close up.

The funny thing is, Megan Fox isn’t the worst actor in this movie. However, that’s like comparing month old milk to six month old milk; it might be a little better, but it will still make you sick to your stomach. I still don’t think she’s very beautiful, just very sexual. I can think of so many other actresses that can do sexy without being over sexy and still seem smart and interesting. Megan Fox just doesn’t have that. 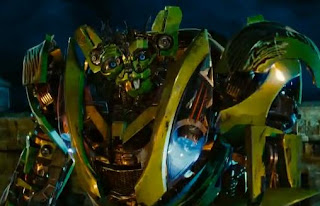 One of the complaints about the first movie was that there wasn’t enough time with the actual Transformers. After watching the sequel, I can imagine Bay saying, “You want more Transformers? I’ll give you the worst characters ever! Then you’ll never complain again!” Too bad, Michael. These new characters (robot brothers named Mudflaps and Skids) are truly offensive. They’re not just racially offensive (they admit they can’t read, one of them has a gold tooth and they actually use the phrase “pop a cap in your ass”), they’re just really terrible characters. We’re talking mind-meltingly bad. All they do is talk in slang and fight with each other. Let me put it this way: towards the end of the movie, one of the twins is apparently eaten. I was literally cheering for the evil robot trying to destroy all life on earth because he killed off that character. When the twin ended up surviving, I was actually angry.

Truth be told, Optimus Prime and Bumblebee themselves were some of the better characters, but you don’t get to see very much of them during the last half of the film. Josh Duhammel is likable in his reprised role as Major Lennox, but he’s pretty much the only human who gets my seal of approval.

The script and plot are chock full of cliches and that’s where this film really falls into the black hole of awfulness. There isn’t an innovative moment in the whole movie and it feels like they stole every plot point from other films. The item everyone is looking for is actually called “the Matrix”. Bumblebee (a character I enjoyed) is just Herbie with a racing stripe and firearms. Even the fight scenes were nothing new and because most of the robots were the same color, I wasn’t sure who was fighting who, let alone who was winning.

My biggest problem with this movie is that Michael Bay has said that this was supposed to be for kids, but this might be the most inappropriate movie for kids that was actually market to kids. Among other things, this movie has: dogs humping multiple times, multiple racial stereotypes, drug use, Megan Fox taking off her pants, robots humping Megan Fox’s leg, Megan Fox finding said humping adorable, excessive profanity and robots farting. Oh, did I mention the robot testicles? Don’t let your kids see this movie. There are so many great family friendly movies that came out this year that easily trump this stinker of a blockbuster.

The funny thing is, I halfway enjoyed the first Transformers. Sure, the humans were pretty annoying, the writing was far from innovative and one of the Transformers was so “black” that they killed him off at the end of movie (that’s Hollywood for you). Still, there were a couple scenes that I liked and I did like Optimus and Bumblebee. It wasn’t offensive, just not very original. Unfortunately, the sequel is both offensive and unoriginal. I shutter to think what Transformers 3 will be like.

Overall: Barely getting by on insulting jokes and tired cliches, Transformers: Rise of the Fallen lacked focus, character development and charm. The action movie genre can do better than this.