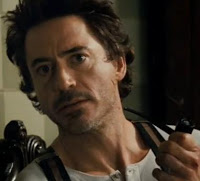 “You do know what you are drinking is meant for eye surgery.”

I wasn’t sure how Sherlock Holmes would do when I first heard of the casting and the choice for director. Don’t get me wrong, Robert Downey Jr. proved himself worthy of taking on a classic hero with Tony Stark, while at the same time director Guy Ritchie has done some of my favorite movies. I just wasn’t sure how the combination would work, especially when telling the story of such a great character. More importantly, I was worried that style would be put over substance. But luckily I was wrong.

Right from the beginning, we are brought into the adventure. In the very first scene, Holmes and best friend Watson (Jude Law) apprehend Lord Blackwood, a cruel man whose tampering with the dark arts and the occult includes kidnapping and sacrificing young women for his own sinister purposes. Right before his death by hanging, Blackwood warns Holmes that death can not stop his reign of destruction. Holmes dismisses it, but things take a turn for the worse when the murderer’s crypt is smashed from the inside out and bystanders have seen Blackwood walking out. At the same time, Holmes must deal with Irene Adler (Rachel McAdams), the only woman to spark his interest, coming back into his life and Watson moving out to take the next step with his girlfriend.

Have no doubts, Downey is the star of this movie. If it had been any other actor in that role, the movie would be vastly different. He commands the screen, just as Holmes commands any room he walks into. He’s also abuses drugs he really shouldn’t (including the eye medicine mentioned at the top), isn’t scared to take on a behemoth of a Frenchman in hand-to-hand combat and doesn’t mind telling anyone and everyone that he is smarter than them (and then proving it). The great thing is that the character of Holmes has always been this way, but this film just brings those aspects of his personality to the forefront. At the same time, Downey plays him very charming and you can tell those around him are reluctantly charmed by him.

Before watching the movie, I did question a skinny, young Watson. But I have to admit, Jude Law did a fantastic job. He so carefully walks the line between exasperation with Holme’s antics and hesitant enjoyment of their adventures. Unlike many versions of the character, he has real intelligence and gives real input into clues and aspects of the situation at hand (although you do tend to suspect Holmes has usually figured it out already). The actual relationship between Holmes and Watson is just a little bit like an old married couple, but it’s an old married couple with tons of chemistry. I think they are helped by their modern doppelgangers House and Wilson, who have a very similar relationship.

I have to give props to the supporting cast, particularly the women. It was a very smart move to put Irene in this rendition. Although she was in only one of the original stories by Sir Arthur Conan Doyle, Adler is a fan favorite and has been featured in much of the post-Doyle canon (including a play adaptation of two Holmes mysteries I had the pleasure to see in Fall 2008). Not only is the former operatic singer beautiful and charming, but also one of the only people in the world able to outsmart Holmes. In the film, Adler has now evaded Holmes and Watson a few different times before coming back to 221B Baker Street and apparently Holmes has gotten to know her a little better (compared to the original story, where they were barely face to face). McAdams (who is best known for the love-lorn Allie in The Notebook) takes a delightful departure from sweet and innocent to seductive and dangerous (as seen early on when some vagrants try to jump her and she more or less beats them to a pulp). You can understand why Holmes considers her an equal and is thrown off guard just by the sight of her. The very best comparison I can find for their relationship is that of Batman and Catwoman. She’s not particularly evil, but despite her attraction to Holmes, she will only do the right thing if it is a benefit to her. At the same time, she is still vulnerable, and as the film progresses, we discover that even she is afraid of her mysterious employer, who threatens to kill Holmes and her if she does not succeed in her job. It’s a fun character to watch and I was just relieved the heroine was not a swooning damsel in distress.

The other woman (in more than one sense) is Dr. Watson’s girlfriend, soon to be fiancee Mary (Kelly Reilly).This is not an easy role to take on. To Holmes, she represents change, especially change in his relationship with Watson. He doesn’t really despise her, but despises the idea of her and it’s certainly a challenge to play someone the protagonist sees only as a problem. I last saw Reilly in 2005’s Pride and Prejudice as the smug and cruel Caroline Bingley, so I thoroughly enjoyed her playing a character with real warmth. Mary is also one of the only people in the movie who not only sees though one of Holmes’ disguises, but also calls him on it. And when she does, even Sherlock admires her a little bit. And like Irene, Mary is also a strong part of the Sherlock canon, with her first appearance in The Sign of the Four, the 2nd Holmes novel. I completely appreciate the filmmakers’ respect for the original stories by using the two heroines straight from Sir Arthur Conan Doyle’s work.

You can tell almost immediately this is Guy Ritchie’s film, if only for it’s very specific style. His use of slow motion and speeding up is very reminiscent of his previous films. There are more than a few scenes where we are presented the outcome first and then the circumstances are unraveled (think the spilled milk scene in Snatch). The truth is, his style works perfectly with Sherlock Holmes because Holmes so often solves the problem first before explaining how he discovered it. This results in one of two things for the audience: either 1. the audience figures it out with Holmes and feels giddy or 2. the audience doesn’t figure it out, but Ritchie lets it unravel in such an entertaining way that the audience still enjoys it. I have to admit that I fell into both of those categories at different points of the film. And there are mysterious moments during the beginning that aren’t really explained until towards the end, which I thought was a bold, but smart move on the choice of the writers because Holmes is traditionally known for not explaining everything right away. The other thing I think Ritchie does really well is show the personality of London. He has done it before in Snatch and Lock, Stock and Two Smoking Barrels, but this is a different time and London feels different. Still, no one but Richie can make London look this cool, even 1800s London. The choice of traditional English folk music for the soundtrack was an especially invigorating touch that helped the film have its great energy.

Really, the only thing that irked me was a very small detail. There is a murder that is hidden from the public. It is not mentioned by any other character, yet Holmes is aware of it and uses his knowledge of it to solve the mystery of Blackwood. There is a chance it was mentioned to Holmes in a deleted scene that was edited out for time, but I was bothered by the lack of an explanation when the rest of the puzzle fit so perfectly into place. Still, I loved that the plot to destroy the English government is centered around a piece of technology that is extremely cutting-edge in 1891 but is in every American household in 2010.

Overall: Like 2009’s Star Trek, Sherlock Holmes stays true to the die hard fans while bringing the iconic characters to a new generation. An explosive start to a promising franchise.