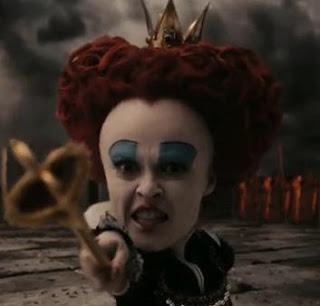 You used to be much more…”muchier.” You’ve lost your muchness.

I’ve written quite a bit on this movie over the past 10 months. Between the teaser, the first few trailers and the extensive promotions on Disney-owned channels (Disney Channel, ABC Family, etc.), I had a pretty good idea of what I was getting into, good and bad, when I went into the theater. Alice in Wonderland has its issues, but is definitely watchable and more than that; it’s enjoyable.

We begin the film with a father, reassuring his young daughter Alice who keeps having the same dream about a caterpillar and a white rabbit and many other crazy things. Years later, the day-dreaming young woman is being pushed by her widowed mother and sister into a marriage of convenience with a prissy, but rich mama’s boy with buck teeth. As everyone waits with bated breath for her answer, Alice spots that same white rabbit she saw in so many dreams. Asking for a moment to think everything over, she follows the rabbit down… well, the rabbit hole. Luckily, she is able to climb out quickly and join the guests again. Just kidding, she goes to Wonderland. And when she gets there, Alice discovers that the inhabitants believe she is the one destined to kill the monstrous Jabberwocky and defeat the tyrannical Red Queen (Helena Bonham Carter).

While I’m usually skeptical of large amounts of CGI in what is essentially a live-action film, the CGI in Alice works positively for the story. Perhaps the most obvious CGI is the Red Queen and her enormous

head. This was one of the most literal references to the original stories and I can appreciate Burton keeping that in (and making it look good). And the other CGI characters work well with the surroundings. Speaking of the backgrounds, they were fantastic. Vibrant colors, beautiful patterns and details, the world of Wonderland is really lovingly designed with a ethereal touch added in. There’s also a sense of ruin in parts where the Red Queen has shown her rage and I liked the contrast (as well as the contrast between Wonderland and Alice’s own pale world). And while Avatar‘s world was amazing, it was while watching Alice that I forgot they had to use a green screen. Everything seemed natural and fluid. The only scene where the special effects are off point is when Alice is actually falling down the rabbit hole. Alice is almost entirely CGI in the scene and it shows.

The strongest thing about the film is the characters in Wonderland. Johnny Depp is the kind of actor who does his best work when he is having fun with the character and he’s definitely having fun with the Mad Hatter. While his makeup is a little outrageous (I remember my first reaction to character stills last summer), the Hatter is not as off-putting as Depp’s Willy Wonka back in 2005. Hatter is actually pretty endearing, but perhaps a little bit too self-aware my tastes (for me, the Mad Hatter will never be able to concentrate on one thing for more than two minutes). And there is a dance he does towards the end of the film that is played up throughout the entire story. When he finally does it, I was very disappointed. Both the dance and the music reminded me of what went wrong in Burton’s Charlie and the Chocolate Factory. More on point was the March Hare (Paul Whitehouse), who reminded me of a fuzzier Groundskeeper Willie on crack. He is probably my favorite of the CGI characters. Tweedledee and Tweedledum (both played by Matt Lucas) are not too far away from their literary counterparts and it was good fun to see them bicker. Stephen Fry was on point with the toothy Cheshire Cat, I can’t think of anyone better for the Caterpillar than Alan Rickman and Crispin “George McFly” Glover does a rather wormy Knave of Hearts (I’m also pretty sure that man never ages). The Red Queen is also one of the better characters. She is possibly slightly less trigger-happy than in the books, but that’s not really saying much. We do find out that her readiness to execute her subjects comes from her own insecurities (in particular, her enormous head) and it was a nice touch. Not all the characters were fantastic, however. While Anne Hathaway was doing her best to make the character work, the White Queen just doesn’t make any sense (in Through the Looking Glass, she was an old woman who transforms into a sheep). It’s such a drastic change from book to screen.

The biggest problem with Alice is the changes the filmmakers made to the story… or should I say, stories. Most people forget that Alice in Wonderland is just one of the books Carroll wrote about the curious little girl; the other book is Through the Looking Glass. This means that every movie adaptation of the Alice stories have to deal with what they will keep, what they will have to leave out and what must be melded together. This movie is no different, and the results have varied levels of success. Let me sum up the books first:

Like I said before, the White Queen was completely changed and I really didn’t appreciate it. It should also be noted that while the antagonist’s name is the Red Queen (who did appear in Looking Glass, but has a very different personality), the character is taken much more from Wonderland’s Queen of Hearts. Throwing these two characters together (and calling them sisters) when they aren’t even in the same world nor the same book just frustrates me.

Another big change is how they’ve altered the entire essence of Wonderland itself. As I mentioned in an earlier post about the movie, I speculated that making Alice into the hero that must create order out of chaos doesn’t make sense. Wonderland is chaos, as are its inhabitants. While they don’t want to be beheaded at the Queen of Heart’s behest (forgive the pun), the thought of overthrowing the Queen would never even cross the creatures’ minds. More over, the majority of the characters fighting against the Red Queen are way too self aware. The Mad Hatter, the White Rabbit, the Dormouse and the Dodo are prime examples. They actually have logical thoughts and as much as I like the overall acting (as I mentioned above), the ret-conning almost overpowers the good performances. It really feels as if the movie betrays the very nature of the books (Burton himself has mentioned that he wanted to add more of a common goal between the characters instead of having Alice meet them randomly, but that changes the whole concept, doesn’t it?).

As I was watching the movie, I realized it had as much in common with The Wizard of Oz than the Alice stories. Alice is the hero they need to defeat wickedness, she is surrounded by a group of misfits (one of which is a tall, dim-witted but kind-hearted man with crazy hair) and guided by a beautiful woman in a sparkly ballgown. There are also a good number of Wonderland doppelgangers she encounters before going down the rabbit hole. Her would-be fiancee has buck teeth and demands punctuality. His mother loves giving orders and is outraged when she discovers the gardener planted white roses instead of red (to which Alice suggests that they be painted). And Alice has a run-in with a pair of twin sisters who like to finish each other’s sentences. While the doppelgangers did make me laugh (especially the would-be mother-in-law), it was so obvious the filmmakers were taking a cue from the beginning of The Wizard of Oz.

I was fairly annoyed that certain characters were not used in the movie. While watching it, I really missed the Walrus and the Carpenter (some can argue they were only in one of the poems, but then so was the Jabberwocky). The Mock Turtle, the Gryphon, Bill the lizard, the Duchess, the Lion, the Unicorn and the White Knight are also missing from the film and I wish they could have been put in somewhere, even if in the background or with just a few lines. The funny thing is that they actually added new characters to Wonderland. Most notable is Bayard, a bloodhound who helps Alice and the White Queen (and has a relatively large part for a new character). So many characters were left out (plus characters like the Flowers and the Dodo have such small parts) and I wish they would have incorporated them before adding new ones.

I realize some might wonder if I’m being too harsh on the film. Any film based on these books have to take certain liberties to make sure they work cinematically (it’s also technically a sequel, so the storyline did not have to be completely parallel). I will admit that I did enjoy watching it, very much so. Even with the changes, the characters that worked were a delight. While the plot wasn’t right for the Alice tradition, it wasn’t the worst movie plot I’ve ever seen. And I actually like Alice (and the performance from Mia Wasikowska). She’s still a curious young woman and her point of view is a bit askew from those around her in the normal world. She likes to speak her mind, even if it gets her strange looks from other. It takes her a little too long to accept that Wonderland is real and that she isn’t going to wake up any time soon, but she is far less annoying than her literary counterpart. And her battle with the Jabberwocky was honestly scary (but some of that could be from my childhood fear of Carroll’s monster). I also liked the use of 3-D, especially the occasional “in your face, coming out of the screen” effect (which is so often lacking in 3-D movies lately and something I miss).

The second half of the movie is fairly cliched and you can spot it from a mile away. I will say that the epilogue (when Alice finally comes out of the rabbit hole) takes a turn that I wasn’t expecting. That was mostly because what happened was practically impossible for a woman in England in the mid 1800s. Of all the wondrous things in the movie, that seemed the most far-fetched. That being said, I still liked Alice, especially how she ends up at the end of the movie. There is real character development and I’m always a fan of that.

The truth is, if you never read Carroll’s books, never saw the Disney cartoon and have no knowledge of the movie’s background before going into the theaters, you are going to be thoroughly entertained. If you have read and appreciate the books, you will probably still be entertained. I know I liked it and might even buy it when it comes out on DVD. That being said, fans will still be frustrated by the great upheaval of the stories. With a project that had so much potential, I wish it had been just a little more faithful to it’s source.

Overall: A fun film with a luscious style, Alice in Wonderland will delight casual viewers and please hardcore fans, but doesn’t quite reach it’s true potential.