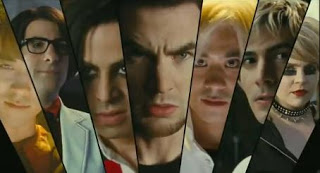 Not so long ago, in the mysterious land of Toronto, Canada….

Book-to-movie adaptations are tricky. If you change too much, the fanbase will be upset. If you try to recreate every single moment, it can easily become stiff and lifeless. And no matter how much blood, sweat and love goes into the filmmaking process, you can never have it be everything to everyone and it will always be compared to the book in some way or another. This fact is multiplied when you’re taking six books and condensing them into just one film. Considering all that, Edgar Wright’s Scott Pilgrim vs. the World is a really good film. Not perfect, but really good.

Scott Pilgrim (Michael Cera) is a 20-something unemployed Canadian in a crappy band. He’s dating a 17 year old. He’s also starting to fall for an mysterious, American delivery girl (with cool hair) named Ramona Flowers. While trying to juggle two girls, Scott has to deal with another big issue. Namely, he has to battle and defeat Ramona’s seven evil exes if he want to have a future with her.

One of the biggest reasons this film works is the direction from Wright. His previous works include Shaun of the Dead and Hot Fuzz, two of my favorite movies. His sensibilities are right on par with the comic series’ style and he was effortless in staying true to the comic and to himself as a filmmaker. It feels like a labor of love that he wanted to share with fellow fans. That’s something special.

While there is a title character, this is really an ensemble cast. The colorful world around Scott is that much more colorful by the people who surround him. Scott’s band members Stephen Stills and Kim (Mark Webber and Alison Pill) have great chemistry and I will always have a place in my heart for Young Neil (Johnny Simmons), the unofficial member of Sex Bob-omb who is never without his Nintendo DS. Newcomer Ellen Wong was really good as Knives Chou, Sco

tt’s teenage girlfriend. It’s not easy to play a slightly (not-so-slightly) obsessive girlfriend, but Wong keeps her likable enough for us to pity her when she gets hurt. And Anna Kendrick (best known for playing the fairly annoying friend in Twilight) is great as Scott’s disapproving younger sister Stacey. My absolute favorite actor in this whole movie is Kieran Culkin, who plays Scott’s gay roommate Wallace. I loved Wallace from the books and Culkin hits the perfect note here. Wallace in many ways is the voice of reason in Scott’s life, but he also has the funniest moments in the film and I adored every scene he was in. During the credits, I found out that the terrific narration was done by Bill Hader.

Props also have to go to the seven evil exes, including Superman’s Brandon Routh, Arrested Development’s Mae Whitman and Jason Schwartzman as Gideon, the evilest ex of them all. Their battles with Scott are easily the most over-the-top moments in the whole movie, but because the seven actors commit to their scenes with such sincerity, it works. A special shout-out goes to Chris Evans‘ performance as Lucas Lee, Ramona’s ex who is now an international action star. The Universal theme plays when he walks onto the set and I could not stop laughing.

Michael Cera did a better job than I expected him to, to be quite honest. He was in his comfort zone in this role, but he has great comedic timing and the majority of his stuff worked. His reaction to seeing coins come out of the first evil ex is priceless. There is growth in the character and by the end, Scott learns to be a better person. And while it seems strange to say it, his actions scenes are really fun to watch. Ramona is played by Mary Elizabeth Winstead and she is a little less successful. In the book, Ramona is sweeter and has a warm disposition. Winstead plays her a little too cold and sarcastic. She was 85% there for me, but there was something missing.

If I had one real complaint about the movie, it’s in the middle part. Because they took six books and condensed them into one film, a lot is taken out. What takes months in the books takes weeks in the film and the middle does feel rushed. The 5th and 6th exes (twins who join forces to battle Scott) feel kind of like the lake scene in Goblet of Fire: they needed to be in the film, but were disposed of fairly quickly. Neither brother actually had lines and unlike the other exes, we learn very little to nothing about their relationship with Ramona (although their amps do go to 11 and that was a nice touch).

If Scott Pilgrim vs. the World does one thing well, it’s staying true to the overall spirit of the books. A large majority of the dialogue and the plot is identical with the books and the actors are strong enough to make those lines seem fresh and candid. There are even a few moments where the movie works better than the books. For example, when Ramona and Knives first come face-to-face, everyone but the two girls knows Scott has been seeing them at the same time. In the comic, you get three or four panels with different characters giving each other scared looks. In the movie, these looks are enhanced by Wright’s direction and the hilarious background music and ends with a prolonged shot of Wallace giving a come-hither look to Stacey’s boyfriend.

It’s an easy word to overuse, but the best way to describe the movie is that it is pure, unequivocal fun. Anyone who loved playing video games in the 80s and 90s will love it, but it’s also a movie for comic fans, too (the visual onomatopoeia reminded me a little of 60s Batman). On a personal note, I especially enjoyed Scott Pilgrim because it was set and shot in Toronto, a city I visited just a couple weeks before seeing the film. When Stephen Stills suggest they all go to Pizza Pizza (the Canadian pizza chain), I got so excited that we might just have eaten at the same place as Scott Pilgrim. There was nothing quite like the moment when, as he and Wallace talk about Lucas Lee shooting a film in town, Scott ponders, “They shoot movies in Toronto?”