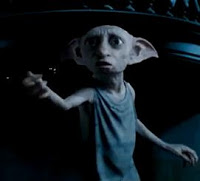 These are dark times. There is no denying.

Last year, my second favorite Potter book was put on the big screen. It was good, but there were some major disappointments in the pointless deviations from the original story. This week, the first part of Harry Potter and the Deathly Hallows was released. This is not only the beginning of the end of Harry’s story; Deathly Hallows is my favorite book in the series, so there was a lot at stake. I was prepared for it to let me down, but I have to tell you… it’s really good.

Because this is such an immense film (and because this is my favorite story in the series), we’re going to do this review a little differently. I’m going to go over some of the things they did right first, and then the things that were a little disappointing. Fair warning, there are a few spoilers for those of you who have not read the book. Sorry.

The Good Stuff:
Dialogue: The one thing Rowling doesn’t get enough credit for is her dialogue. When I’m reading her books, I never feel like the conversations are fake or forced. And so much of Deathly Hallows the book is dialogue! This is the first Harry Potter movie where I feel like the writers focused on the dialogue from the book instead of rewriting the majority of it. So many of my favorite lines were kept in, including George’s lame joke after losing his ear in the battle (“The whole world of ear related humor and you went with ‘I’m holey’.”).

Little details from the book and other plot points: There are too many to mention here, but that’s a good thing. Like the dialogue, those little details seemed to be given more attention than in previous movies and I think DH pt. 1 is better for it. Ron and Hermoine holding hands as they fell asleep at Grimwald Place was fantastic, as was Hermoine hitting Ron repeatedly after he comes back.

I was glad they were able to fit a lot of the important plot points into the film instead of gliding over them, but the problem is they had to put in important plot points and characters very quickly. The 7 Harrys scene went like this: “Hi Harry, I’m Bill Weasley, who you should have met about three years ago. I’m engaged to Fleur, which you should have known about a year ago. Here’s Mundungus Fletcher, who you should have met two years ago. Oh, and I got my faced screwed up by Fenir Greyback a few months ago in the now nonexistant battle after Dumbledore’s death!” The good news? Dobby’s scene is perfect. I cried when I read the book and I cried during the movie.

Actually good additional scenes: I had a huge problem with the added scenes in Half Blood Prince, especially burning down the Burrow -which has miraculously been rebuilt perfectly by the beginning of DH, by the way. I was very hesitant about the new film because I expected the filmmakers to put in extra scenes just to add their mark on the piece, regardless if it adds to the story itself. Luckily, every added touch had a purpose and made the movie stronger.

Seeing Hermione erase her parents’ memories of her was an emotional beginning to the film (and it was briefly mentioned in the book, so no ret-con there). I cheered a little when we saw Neville fearlessly stand up to the Death Eaters who hijacked the Hogwarts Express. Matthew Lewis‘ small performance was perfect and really sets up his character for his role in the Battle of Hogwarts. This might be a controversial statement, but I liked the little dance scene. It felt natural for two friends to enjoy some small comfort when everything has gone dark around them. As the song slowed down, it was obvious that while they were glad to have each other, Harry missed Ginny and Hermoine missed Ron. Oh, and discovering just what Belatrix did to torture Hermoine was horrifying, but important to knowing how dangerous their enemies are. It also solidifies my theory that the fallen Ministry represents Nazi Germany.

The Characters: I think we can all agree that Daniel Radcliffe, Emma Watson and Rupert Grint‘s acting has greatly improved since the Sorcerer’s Stone, but with such a focus on the relationship between their characters, the three actors really stepped up. Grint is particularly strong as Ron, but it helps that the writers gave him more lines than, “Bloody hell!” and “Wicked!”. They really let Hermione and Ron’s relationship grow more in this one. Radcliffe is good, but his best moment is a wordless scene with an equally impressive performance by Tom Felton as Draco, who holds Harry’s very life in his hands.

All the supporting actors are wonderful, but with only one scene in the whole film, Alan Rickman is just brilliant… so much nuance in just a few minutes. And I will always love Evanna Lynch as Luna. Lynch really has the character down and Luna brings light to any scene. I feel sorry for the guy who plays Dean because once again, his part has been cut out.

The Peverell Brothers: I was wondering how much they would explain the Peverell Brothers and the legend of the Deathly Hallows. I was completely blown away by the artistic direction they went with telling the legend. It was daring to use computer animation to make a sort of shadow puppet play, but the overall effect combined with the narration by Emma Watson was stunning. If they decided to make a DVD of all the Beedle the Bard stories using that animation, I would be thrilled (are you listening, Warner Brothers?).

The Not-So-Good
Little details: There were a few moments in the book that could have easily put into the movie, but they didn’t. The Dursley’s leaving was in there, but not Dudley’s goodbye? It would have added maybe four seconds and it would have meant so much! The same thing goes for Moody’s eye in Umbridge’s door. We see the eye, we see Harry walking out the door. He couldn’t have grabbed it, really? And Harry does go into Sirius’ room, but we don’t see the letter nor the torn picture. However, the absolute biggest shame is that Wormtail is simply knocked out. In the book, he has this moment of redemption and it was sorely missed.

Missing plot points: Here’s the big thing that hindered the movie… there were still a few different parts of the novel that are very important to Harry finishing his journey that were either brushed over or left out entirely. Harry’s obsession with the Hallows is completely gone, which is a shame. Also gone is the trio’s knowledge of the other horcruxes -this is mostly thanks to the filmmakers cutting out that information from Half-Blood Prince, but still. Harry has the shattered mirror, but we aren’t told where it came from (again, thanks to it being cut out of an earlier film). There is also less attention to Dumbledore’s biography, but I’m sure his past will be revealed more in the last movie.

Even with the flaws, Deathly Hallows pt. 1 is the first HP film that feels like it was made specifically for fans of the books. Casual audience members will like it, but the fans will love it. Because this is only the first part of the story, I have a feeling I’ll have to review the second part and then the two parts together. But I have to wait for July. It’s going to be a long eight months.

Overall: Faithful to my favorite book in the series, Harry Potter and the Deathly Hallows pt. 1 has become my personal favorite of the films. I can only hope pt. 2 will top it.