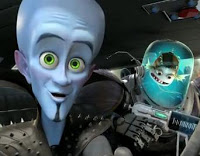 “We all know how this ends: with you behind bars!”
“Oooh, I’m shaking in my custom baby seal leather boots!”

Remember the scene in The Dark Knight when Nurse Joker goes to visit Harvey Dent in the hospital? The clown describes his behavior as a dog chasing a car: “I wouldn’t know what to do with one if I caught it.” Dreamwork’s Megamind explores what happens when the supervillian gets everything he thought he wanted.

Megamind (Will Ferrell) has been Metro Man’s antagonist for their entire lives. So, when one of his schemes causes the super-powered crusader (Brad Pitt) to be blown to smithereens, Megamind is thrilled… until he realizes how much he misses the chase. The only thing to do is mold a mild mannered citizen into a new hero so balance can be restored. While secretly training awkward cameraman Hal Stewart (Jonah Hill) for the role, Megamind also accidentally starts dating local reporter and past kidnapee Roxanne Richti (Tina Fey).

The opening scene before the title was actually posted onto the internet a while ago, so many of you have probably seen it already. I hadn’t seen it until I went to the theater, but I immediately liked the film off the bat because of it. The opening represents what a lot of us went through in school – rejection, isolation, searching for some kind of purpose and identity – and took it to a comic book level of extremes. Most importantly, it sets us up for the love-hate-but-mostly-hate relationship between hero and villain.

At the center of this film is Megamind’s enthusiasm. We get to see one of his prison breaks after the title and he’s so giddy and eager for the dramatics of it all. And his plan is actually pretty clever, to boot! That enthusiasm is infectious; you do find yourself getting swept up and even cheering for him.

Many of you know I am a fan of The Venture Brothers. Think of this as its PG-cousin. Megamind shares some big themes with the Adult Swim show, including the concept of organized villainy. Megamind thrives on the hero/villain format and its fun to discover how much he actually admires his nemesis. He’s awkward and the underdog, but darn gone it, he’s kind of lovable, too. You understand why Roxanne ends up falling for him when he takes up his alter-ego.The writing has something to do with the guy’s likability, but big props go to Ferrell for providing some great takes on these lines (Megamind has a very particular way of pronouncing words and it’s a consistent running gag throughout the movie). This is the first time in a long time where I could separate his character from his normal on-screen persona. Megamind as a character does suck you in and it feels like no comedic moment with the guy is wasted.

I don’t know if David Cross has ever been called “adorable”, but he totally is as Minion, Megamind’s life-long partner-in-crime. Realize, Minion is a sentient alien fish living a cyborg ape and he’s still absolutely adorable. Megamind and Minion have amazing chemistry and the dialogue between them is just so delightful. In some ways, the two of them are the most innocent of all the characters, which makes for a nice juxtaposition with their professional evilness. If you’re asking for just one reason to see this movie, my answer is David Cross.

The three other major characters in the film are well-written in themselves. I’m all for quick witted, strong and relatable heroines in kid’s movies and Roxanne hits all the right notes. Jonah Hill is pretty much playing his standard shlumpy dork, but his power trip towards the end makes the character far more interesting. Brad Pitt isn’t in much of the film (because his character disappears early on), but his performance and the character itself impressed me. What starts off as a stereotypical jock personality becomes a well-rounded, mature adult. The moral of his part of the story is that even the most vapid jerk from your past can change.

Woven throughout the movie are nods to the classic superheroes. Roxanne Ritchi is Lois Lane, Hal is Jimmy Olsen. When training Hal, Megamind pretends to be the nerd’s “space dad” by sporting a hologram that looks suspiciously like Marlon Brando in Superman (a truly hilarious impersonation from Ferrell). Megamind has an invisible car ala Wonder Woman (but has the obvious problem of misplacing it). Metro Man’s admitted weakness is actually lamer than the Green Lantern’s intolerance to the color yellow. Plus, the Commissioner Gordon-like Warden is voiced by the gruff J.K. Simmons, aka The Daily Bugle‘s J.J. Jameson.

It isn’t a perfect film; I thought it was weird how no one in the city makes a big deal about Megamind’s takeover once we get to the 2nd half of the film. I kept thinking that someone would question why their Overlord goes from celebrating in the streets and throwing random cars at buildings for fun to being an apparent recluse. That being said, films like this show that Dreamworks is trying to make smart, thoughtful and genuinely funny movies that aren’t just Pixar knockoffs. They have their own style and their own heart and that’s very cool. Just as long as there are no more Ice Age sequels, you’re on the right track.

Overall: Megamind is definitely an fun movie for kids, but it can be easily enjoyed on another level by comic fans and anyone who survived high school. And David Cross is awesome.

FYI: I did not see it in 3D, but I found it perfectly enjoyable without the dimensional effect.