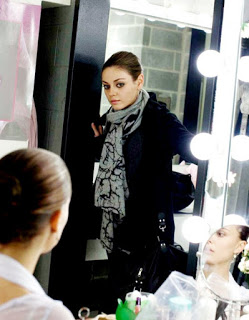 The only person standing in your way is you.

It took me a few weeks just to find the time to go out and see this film. After getting home from the theater, I immediately went to bed… and I was more than a little worried that my dreams would be plagued with flashes of this movie. Luckily, I was spared of nightmares, but needless to say, Black Swan is a genuinely stirring movie.

Nina (Natalie Portman) is a timid but rigidly talented professional dancer in her 20s, living with her mother and paying her dues at a prestigious New York ballet company. The company’s director Thomas (Vincent Cassel) has chosen Swan Lake as the season’s premiere, with the coveted duel role of White and Black Swan up for grabs. Nina is given the role, and she is impeccable as Adelle the White Swan, but is urged by Thomas to embrace her dark side so she can fully embody the Black Swan. In the weeks before the production, Nina inches closer and closer to the brink of insanity.

More than anything, what this film has going for it is the element of surprise. Not every scene has a freaky, mind-bending scare in it, but you’re never sure when one is going to happen. Some of those moments you see coming, but a lot you don’t. Even the ones I could feel coming were still scary and often really unsettling. Pretty early on, she sees there’s a small movement while alone in her living room that was subtle, but scared the hell out of me.

Besides the quieter tics of insanity, the film also makes good use of one of my big phobias… namely, my body failing me or falling apart. Nina has a bad habit of picking at her skin and in a moment of questionable sanity, that picking of her cuticles leads to one of the more gut-wretching scenes in the film. Other moments like this happen throughout the film, but that first moment (when she’s dressed to the nines, no less) made my stomach turn. I compulsively pick at my skin (dermatillomania is the official term), so these scenes were almost unbearable for me to watch. Still, I think these moments were meant to be almost unbearable; that way, when Nina shakes these moments off, we see just how willing she is to sacrifice her body for perfection. Even when her knees buckle back 180 degrees and she’s picking the start of feathers out of her back, she refuses to leave the show. And these effects were done with such realistic precision that I couldn’t help but look away.

That really leads us to Portman’s performance. I’ve seen the actress in other roles and in interviews… from what I can tell, she is a confident and open person. But while watching her as Nina, I really did believe that she was a timid woman with almost an arrested maturity. As I mentioned earlier, this character is used to sacrificing her body for her profession: her feet are mutilated from years of using en pointe ballet shoes, her rib cage is practically concave and she regularly purges. When she starts feeling and seeing her body mutate into this monstrous creature, you can understand why she doesn’t tell anyone about it because she’s used to keeping secrets about her body. The injured feet, ribs and the purging happens before she even learns of the production, much less gets the part, but we also see the psychological damage before the production is announced. She still has the emotional development of a young girl and there’s definitely something disturbing happening in her mind from the very beginning. When we first see her making her way to practice, there’s a moment when she thinks she sees herself on another part of the subway. This sort of thing happens more and more as the film progresses, but her reality is already becoming eschewed before this challenge to go darker is even put to her. It shows just how frail her state of mind is from the start.

Mila Kunis plays Lily, Nina’s new rival who embodies for her the dark swan personality that seems out of her grasp. I wasn’t expecting to like Lily, but she was really the only likable person in the whole film. The trailers for Black Swan made her out to be very manipulative, but she’s really actually quite nice to Nina throughout the story. Sure, there was some advice I wouldn’t take from her (taking recreational drugs and partying the night before a rehersal, for instance), but she wasn’t being malicious. In many different ways, she’s the most sane character in the movie. Hell, she’s the only person I see really eating anything substantial (a sandwich, of all things). And it was nice to have one character who didn’t take everything so incredibly seriously.

Two of the minor characters surprised me. One was Nina’s mother (played by Barbara Hershey), who I assumed was going to be the most rigid of stage mothers. She still has some of those frantic, anxiety-filled and far too controlling tendencies, but there were many times when she was more concerned about her daughter’s well-being than the show. That being said, you can tell the arrested development in Nina is caused by her mother’s influence. She treats her daughter like a preteen; just looking at Nina’s pink-walled, stuffed animal-filled room can show you that. Nina still calls her “mommy.” The other surprising character was Thomas the show director. I actually assumed he would try to seduce her and while he does make a couple passes at her, his motivation is to get that dark side out of her. Don’t get me wrong – it’s still incredibly sleazy, but he genuinely thinks it will push her creatively and that’s his motivation.

The other castmember that stood out for me was Winona Ryder as Beth, the aging diva who Nina has ousted. Through her, we see how Thomas treats his Prima Donnas… passionately, but only to get that right performance. It’s obvious that he cycles through these women at ten years or so at a time. I’m not even sure he realizes the damage he does to the women he uses up. Beth’s last scene is truly horrifying. There’s a Chekov’s gun in the scene that I figured out quickly, but I wasn’t sure how it was going to be used. How it’s actually used still makes me sick to my stomach.

Many people have commented on the love scene between Kunis and Portman. Funnily enough, I didn’t find it so extreme, especially considering its place in the film. It is interesting that the critical voices against that scene are silent about Thomas kissing Nina. Her boss pushing himself on her and yet people are in an uproar about a sex scene where she’s a willing participant? Now, for audience members who have worked in the dance world, this film might seem to misrepresent ballet. If you are one of those traditional ballet lovers looking for a ballet film, this isn’t really it. Don’t get me wrong, the choreography is really lovely and there’s plenty of the Swan Lake’s score throughout the film (almost too much actually… I had it in my head for days after), but Black Swan is focused the most on Nina’s descent into darkness, with the ballet as a backdrop. To use another of director Darren Aronofsky‘s films as an parallel, you wouldn’t go into Pi

thinking it’s a film about the life of an average mathematician. If you did, you’d be sorely disappointed and confused.

There are definitely some issues with Black Swan. I already mentioned the constant soundtrack, but it really does become annoying. Even Nina’s ringtone is a Midi file of the ballet’s main theme. And it kind of annoyed me that Aronofsky put Nina in almost all white (with occasional light pink tones) and Lily in almost all black… for the entire film. While I understand using the costume design as a metaphor, did they really have to make it so obvious? When going to a Gala, Nina’s basically wearing a wedding dress. We get it, she’s virginal.

The biggest issue I had was how long it took Nina to actually start dancing with that emotion and abandon her director demanded. I mean, she starts losing her mind early on in the film, but we only see her start showing passion in her dancing during one of the last rehearsals before opening night. If I was Thomas and saw her failing even a week before opening nights, I’d pull her out of the show and fast, but that doesn’t seem to cross his mind. Actually, I’m still questioning why he cast her in the first place. I mean, she bit him when he forced himself on her. He takes that to mean she had some passion deep down inside, but maybe (just maybe) she just wanted her boss to stop sticking his tongue down her throat. Anyway, it really bothered me that her dark side didn’t show in her dancing sooner. I was expecting her to channel that darkness into real power and it just didn’t quite get there. It was a disappointment.

The best thing you can say about Black Swan is that (at least from first viewing) it is an experience. Never knowing when reality will eschew in Nina’s mind keeps you on your toes as an audience member. These parts made me look at my own insecurities and phobias, which was not always comfortable but made for an interesting experience in itself. It was a fun movie, in a very smart and creepy way.

Overall: With stunningly fluid and eerie special effects and two actresses who know how to play different sides of the same coin, the ever bending world of Black Swan is a ride in itself… although one I’m not sure I can stomach again for a while.