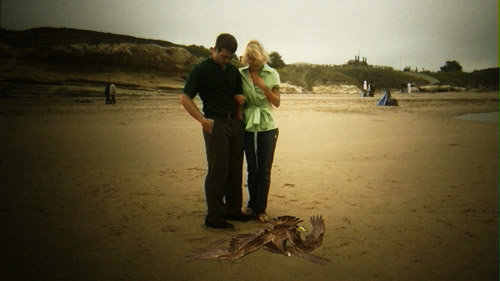 It’s been a couple months now since I saw this movie. I actually mentioned it on the first podcast, but I never did a post on it. After watching it again this week, it felt like the right time to go into just what’s so bad about Birdemic: Shock and Terror

I’m actually not kidding about the title. It’s incredibly difficult to fully explain what is wrong with this movie because almost everything is wrong with this movie. Every scene of this Hitchcock ripoff (and I do mean every single scene) could be broken down piece by piece to fully explore what makes this a piece of crap film. I’m starting to believe it is physically impossible for any of my readers to “get” why it’s so bad just from a post like this one. Birdemic can only really be experienced… and once you do, you’ll try to explain this to others. You will fail.

That all being said, this is a small taste of what went through my mind while watching this movie:

Birdemic is easily the worst shot movie I have ever seen that wasn’t recorded for a grade school project (actually, my all-girl reenactment of the Lincoln assassination in 5th grade might have been at least more consistent, if not better quality). The worst part is the first ten minutes or so, which has the weirdest and least consistent sound quality of the whole film. That’s not to say the rest of the movie is good… it’s still some of the worst editing I’ve ever seen, but the first section of the movie is so astoundingly bad.

Now, Birdemic was made on the meager budget of $10,000, so one could argue that the poor special effects and editing were the result of stretching that minuscule budget. The problem is, even if the film was properly edited (and shot, for that matter) and better effects put in, that still doesn’t account for the story and dialogue. Except for survivors of bird attacks riding in a van, there isn’t a plot. Director James Ngyuen crafted the script with his own hands, and there’s no sugar-coating how awful it really is. The soulless acting doesn’t help, but even just the dialogue on its own is awful. Here’s a quote straight from the movie’s IMdB page: “It’s the human species that needs to quit playing cowboy with nature. We must act more like astronauts, spacemen taking care of Spaceship Earth.” And that’s the script trying to sound like an intellectual. The rest of the dialogue isn’t nearly that ambitious.

But we can’t forget the acting. I’m not sure if any actor could have saved this script, but these “actors”seem to be going out of their way to not save the script. Oh, and don’t forget about the “dance scene.” Possibly the weirdest catchy song I’ve ever heard (with a really long refrain) is playing while our charmless love interests awkwardly dance the robot.

What scares me about Birdemic is how serious the movie takes itself. There have been plenty of bad disaster/monster movies in the past few years, most of them coming out of the Sci-Fi/SyFy Channel (MegaPirahna

). The thing is, SyFy knows they’re making B-Films and they have the dignity to put some tongue-in-cheek into their productions. Those productions understand the kitch appeal. But Birdemic doesn’t know it’s ridiculous, and that’s a problem. Ngyuen has officially (and earnestly) called it a “romantic thriller”, despite the fact that the romantic leads have the charisma of driftwood and there is nothing thrilling about this disaster of a movie.The factless environmental message only hurts what integrity the film has. Global warming creates bird flu and exploding bird acid, you say?

While I do suggest you check the movie out just for the experience of one of the biggest messes in film history, I’d advise watching with the awesome Rifftrax, which helped me avoid banging my head against the wall in frustration until I lapsed into a coma. I’ll leave you with the goofiest thing I’ve ever seen.