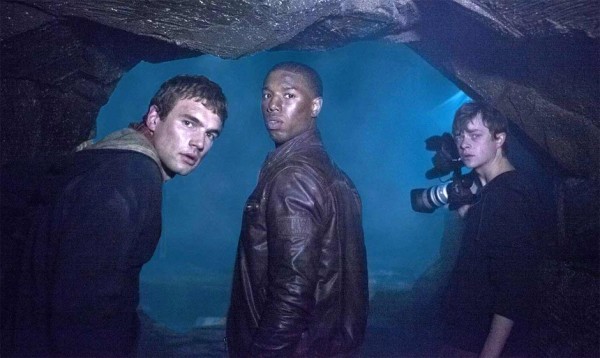 I’m not sure if this is really true or if nostalgia is just getting to me, but they don’t seem to make movies like they used to. There’s a lot of crap out there that ends up making money thanks more to marketing than the film’s actual quality. I get that making money is how the industry survives, but if it’s at the expense of all taste and quality … well, it’s a shame. So when a smartly written film comes along that uses every cent of its small budget to good use, I can’t help but encourage people to see it. Chronicle is one of those movies.

During a high school rave, a shy student (Dane DeHaan), his cousin (Alex Russell) and one of their athletic classmates (Michael B. Jordan) stumble upon a strange glowing … thing in a sinkhole. After they discover they’ve gained superhuman powers, the trio begin to document their explorations into their new powers. Of course, things start to go wrong when one of the them slowly goes mad with power.

I think most of us are rather sick of found footage movies, but I can forgive Chronicle on using this particular filming style. When you learn more about our main protagonist, it makes sense that he wants to document everything. And thanks to the superpowers, the characters (and director Josh Trank) are able to move the camera in more artistic shots that you can’t get in normal found footage movies. Writer Max Landis (son of John) also wrote in other characters to have cameras and video phones so that we can see it through other eyes. Of course, it kind of makes it impossible for it to be found footage when it’s made clear that some of these cameras are destroyed, which is probably why the many multiple camera shots in the last 15 minutes or so took me a bit out of the movie.

Again, the budget for the film was only about 12 million, compared to say … Jack and Jill, which was estimated at a rather bloated budget of $79 million. Chronicle squeezes every penny into the effects, making the powers often simple and understand, but effective thanks to the acting of the main cast. Even when the effects are less than realistic (one of the only steady camera scenes is during a talent show and the special effects are far more obvious during these straight on shots), you are still invested in the characters and their story. The flight scenes are actually incredibly enjoyable because you get swept up in the character’s excitement of the moment.

Just recently another found footage movie came out about teenagers doing reckless things … it’s called Project X and it’s about a teen completely destroying his parents’ home during a party. By the accounts I’ve seen, the characters in Project X are unlikable and unpleasant to watch. In comparison, while the trio in Chronicle do irresponsible and often dangerous things, you still genuinely like them. The pranks they pull on random strangers could have felt considerably cruel in the hand of lesser actors, but they feel like real kids who are more or less good if not a bit irresponsible.

Landis also takes the time to show us how the one character who snaps was bent to the breaking point by outside forces … in another life, his breakdown wouldn’t have happened. There’s a theme of violence begetting violence and an almost Shakespearean fall from grace. The build towards the fall takes most of the movie (with realistic ebbs and flows in the intensity) and like in Hamlet and Othello, the audience must watch and cringe as we see the pieces slowly but inevitably unfold.

If anything, the movie stumbles only in the last 15 or so minutes pushing towards the climax. The extra cameras do become tedious and even difficult to follow. The love interest for one of the boys felt unnecessary, although I appreciated that the character never tried to win over fair lady by abusing his power … that being said, she did get won over a little too easy after only a few short scenes with him. She’s not the worst love interest I’ve seen (the actress did a decent job in the role), but she’s one of the weaker characters in a mostly strong cast.

More than anything, the team of DeHaan, Russell and Jordan are the glue that keep the film together. While certainly the most focus is put on the one teen that falls from grace, each of the trio seems to find in each other companionship that they were each secretly, desperately craving. And when it comes to watching films in the theaters, I’d much rather give my money to a low budget intelligent character piece with a sci-fi twist than most of the schlock Hollywood pukes out every year.

Overall: A superhero movie that dares to question our ability to handle that immense power, Chronicle manages to draw us in a simple premise, stumble towards the end, but mostly keeps the audience invested in the well-written and often heartbreaking character