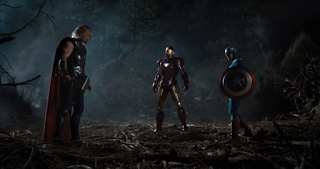 Way, way back in 2010 – two years ago this week, to be precise – I reviewed Iron Man 2 and thought it was a decent movie (it hasn’t held up brilliantly since then, but I still say it’s a pretty good film). At the end of the review, I mentioned the film’s references to Thor and Captain America, as well as the rumors of an Avengers movie. I believe my exact quote was,

I have to stress, it isn’t just the inside jokes for the fans that make
these moments so great. It’s that the filmmakers for all these movies
are working together to make a universe where movies interweave and the
plot in one film can greatly affect the next in a technically different
series. This is the kind of thing that happens in comics all the time,
which means we are redefining what a comic book movie can be.

It’s a very exciting time to be a nerd.

Now, I had few people (including my boyfriend and now co-video editor Mike) tell me that maybe I was exaggerating in my eagerness for the subsequent movies … that the Marvel Universe franchise wasn’t going to be as thematically and emotionally explosive as I was imagining in my head. Well, I get to rub it in their faces because I was totally right … The Avengers rock!

In case for some reason you don’t already know, the Avengers are comprised of billionaire/iron person Tony Stark aka Iron Man, defrosted WWII super soldier Steve Rogers aka Captain America, god of thunder Thor, deadly super spy Natasha Romanoff aka Black Widow, archery bad ass Clint Barton aka Hawkeye and Bruce Banner, the quiet doctor who turns into the Hulk. While the Avengers project was put on hold indefinitely, they are brought together when Thor’s bitter brother Loki get a hold of a powerful energy source to bring an intergalactic army to Earth to conquer the planet.

This is truly an ensemble film (I haven’t even mentioned the other SHIELD characters like Nick Fury, Maria Hill and Phil Coulson) and I’ve never seen a movie balance each character’s development and relationships with one another while still keeping a fairly focused plot. Some of this has to do with the fact that most of these characters have already been developed in the earlier movies – and that was still a very smart way to go – but so much of the credit goes to writer/director Joss Whedon. What can I say? The guy knows how to write compelling groups of misfits. Did I mention this movie is also hilarious? And in all the right ways. I wish I could tell you all the best parts, but I don’t want to tell you all the best parts. Just trust me when I say you’ll be laughing for all the right reasons.

OK, I’m going to go through the characters one by one because that’s the only way I’m going to get through this. First Tony. Tony has easily had the most time to develop as a character and Robert Downey Jr. has his personality down to a science. You really like the guy more now because he’s a little more self aware and open with people (he connects with Dr. Banner in a couple scenes). We do get a scene with Pepper Potts and the two characters work really well as a couple. While Tony is still snarky and cocky, I don’t recall him really flirting with any women in the movie and he accepts the responsibility of this mission pretty quickly … he’s actually matured a little. For her part, Pepper (Gwyneth Paltrow) has loosened up a lot with Tony. The two of them have good chemistry and good dialogue, which make for a good combination.

One of the big storylines of the movie surrounds the headbutting between Tony and Chris Evan‘s Captain America. It’s easy to see why – old school vs new school, traditional gentleman vs cocky playboy, war veteran vs the millionaire who never had to enlist. Plus we learn that Tony’s dad “never shut up” about the hero known as Captain America, so maybe there’s some dad issues mixed with jealousy on the part of our Mr. Stark. Plus, Tony really likes messing with people.

When they do finally work together (not just the two of them, but the whole team), it works because they had to overcome their massive personality differences to do it. There’s also this great moment when the team is shocked by terrible news and Tony is angry and feeling immensely guilty. While there aren’t too many direct references to last year’s Captain America movie, it reminded me of the scene where Steve tries (and fails) to get drunk after Bucky died because that was the first real time he lost a soldier. When he sees Tony in that position, Steve does his best to comfort him and that’s when the two of them really bond. It’s a very cool scene and one of many where Chris Evans really gets to show his talents as a serious actor.

Everyone is talking about how good Mark Ruffalo is as Bruce Banner, and he’s completely worthy of the praise. It’s seem silly to say it, but Ruffalo portrays the Hulk as an incredibly nuanced character. He’s a good guy who happens to have a huge weight on his shoulders – you like him for the good he tries to do and sympathize with his monstrous burden. Joss’ expert tension building comes into play with Banner since it takes a good amount of the movie before Bruce actually turns into the Hulk. Throughout the whole movie the rest of the characters are well aware of Banner’s potential to murder them all in a rage, but I really liked that none of the Avengers treat him like a monster. Like I mentioned earlier, Tony messes with him a bit, but he’s also really friendly to the good doctor. I enjoyed watching Ruffalo and Downey together.

I gave Scarlett Johansson some grief for Iron Man 2 because her Black Widow was pretty damn boring. Here, Whedon’s talent for writing engaging female characters comes back into play. Johansson isn’t the strongest actor in the bunch, but her Natasha is much better in this 2nd appearance. Her opening scene is pure fun without objectifying the character in any way and the rest of the movie she is treated more like a person than eye candy. She’s still very pretty and I’m sure the lady-loving section of the audience will like her curvy uniform, but it’s not vulgar, it’s no different than any other SHIELD agent and it’s certainly not alienating to the women Marvel fans. I even like that her hair is short and more functional for a spy on the go.

Thor is also underutilized … he just doesn’t get a lot of development beyond wanting to protect the earth and perhaps help his brother redeem himself. That’s not to say we don’t get to see Thor a lot – he has some one-on-one time with Loki and has one of the most satisfying fight scenes in the whole movie (I think the words I used was “Every fan’s dream”). Chris Hemsworth is another talented actor and I look forward to his next appearance as the character. Hawkeye also doesn’t have as much to do, but Jeremy Renner does well with what he is given. He’s really best in the action scenes (although I have heard that whoever trained him on his bow taught him wrong). Some of the early marketing for the movie hinted at Hawkeye and Black Widow being an item, but I’m so glad they kept it ambiguous. The two are just very close as partners for justice and she sees him as the person who had faith in her when no one else did. Whedon could have made this a stereotypical love relationship, but instead made it far more interesting.

As a villain, Loki was much better here than in Thor. It goes back to the script … this is a god of mischief who got to actually manipulate people in a more cunning way. Loki also looked like he was finally having fun being terrible to everyone and Tom Hiddleston quietly but gleefully mocking Nick Fury was just so enjoyable to watch.

Speaking of Fury, this is Samuel L. Jackson’s best work in a long, long time. When we look back on his career, this is one of the roles he’s going to be best remembered for. Fury certainly has the cocky “bad motherfucker” attitude Jackson is known for, but he really gets to stretch his acting chops here and show some range. His Fury is not a straight as an arrow good guy … we learn that his choices are often a shade of grey, even if he’s trying to do the right thing. There’s complexity to his character and that makes him a much more engaging leader. Like Hemsworth and Renner, Cobie Smulders doesn’t have a whole lot to do, but that’s because she’s not the focus of the movie. I’d like to see what she does in the next films, but for now it was fine that she was mostly in the background.

But who really steals every scene he’s in? Agent Phil Coulson, played expertly by Clark Gregg. I’ve had a soft spot for Gregg’s special agent since he was first introduced in Iron Man and now his character has moved onto TV in Ultimate Spider-Man. But here, we learn he’s the ultimate Captain American fanboy and a proxy for pretty much the entire Marvel fanbase. Plus, he’s given some of the best lines and Gregg hits them perfectly.

Is the movie perfect? No, it’s not. There’s certainly some aspects of the plot that get glanced over, some of the rules of the Hulk’s transformation vary depending on the film’s needs and certain small plot points raised my eyebrows (400%?). But practically all of the minor issues can easily be overlooked because this movie is so, so much fun, especially during the fight scenes. The last big battle for the fate of the human race is immensely enjoyable and well-shot. I went to see it in 3D and while I don’t necessarily suggest going to see it in 3D, that last battle is pretty fantastic with that kind of depth.

So, do I suggest you watch The Avengers? Hell. Yes. Make sure you see it in theaters – it is well worth it. Oh, and if you are in the United States, make absolutely sure you stay to the very end of the credits … you’ll see an awesome teasing clip at the beginning of the credits and you’ll want to leave, but don’t. Stay until the end for one last dose of Whedoneque sensibilities.

Overall: I don’t think we could have asked for more in this culmination of four strong franchises. The Avengers is a brilliant start to a summer full of blockbuster superhero goodness.