Home  /  Movie Review  /  Birdemic is an maniacal masterpiece of failure 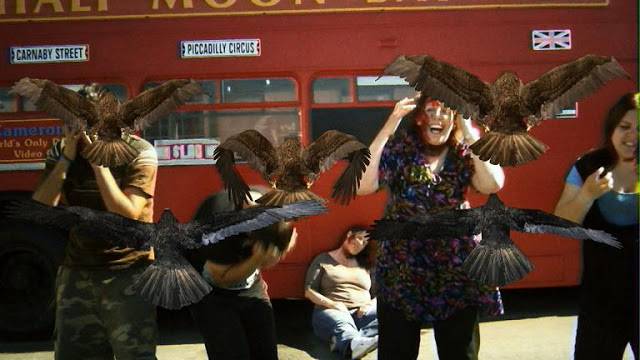 Last night I watched Birdemic for the umpteenth time. The last time I wrote about the movie was way back in May 2011 and I ripped it a new one, which is pretty hard since the editing is full of holes already. Oh and the dialogue. And the plot. And the pacing. And the writer/director’s general grasp of science. And the special effects. What was I saying? Oh right, Birdemic. At the time I wrote the original post I was overall enraged at the sheer badness of the movie, the complete lack of acting talent, the ridiculously long driving, parking and pulling into traffic transitions. But like most breaks from reality, the more times I watch this bizarre piece of would-be Hitchcockian horror, the more I found myself losing track of space and time, slowly loving this movie. Truly I have gone mad.

The thing is I know it’s bad. In fact, by watching it multiple times I’ve been able to pick up on even more things it does horribly, horribly wrong. But that’s when you realize it’s utter wonderful horribleness. This is my Plan 9. This is my The Room. This is my Trolls 2. It is so, so bad but if it’s horribleness is Apollo 13 then it’s utter silliness is the moon and the movie somehow slingshots back into enjoyability. Of course, being enjoyable doesn’t stop it from being a total failure of concept, tone and effects.

Yet despite all of it horribleness there is some charm to the movie, which is the main reason I can watch it all the way through. None of the actors can act (absolutely none of them) but a few actors like the mom and the best friend at least try to put some energy into their performances since they can’t put in talent. I’ve said it before and I’ll say it again – it is a little sad that the best actor in the movie is also the guy who’s best known for humping the back of his friend’s chair. And of course it’s also sad that the first half of the movie is the most pedestrian romance ever put to film and yet it’s mesmerizing. Why does her phone sound like a bike bell? Why did they shoot a 30 second pan of a mural in a Vietnamese restaurant? Better question, why did they chose to keep it in the movie? These are just a few of the many questions this film brings up that really have no answer. And yet we keep searching for the answers. Which is why I keep watching this movie about killer birds that secrete acid on people and also blow up.

So yes, if you watch the movie with Rifftrax, then Birdemic is actually enjoyable in a sick “slow down your car to watch the horrific accident involving 90s bird GIFs” way. But I’m down the rabbit hole, you guys. I can only see blurry candy bars and
stock options and spruce bark beetles and animals, such as seals. Oh,
and today at work I actually had to write copy about solar panels and
the information I was given spelled it “sola pannels.” That did not
help. Oh god, I hear a mountain lion!