Home  /  Movie Analysis • Movie Review  /  What was The Master about, again? 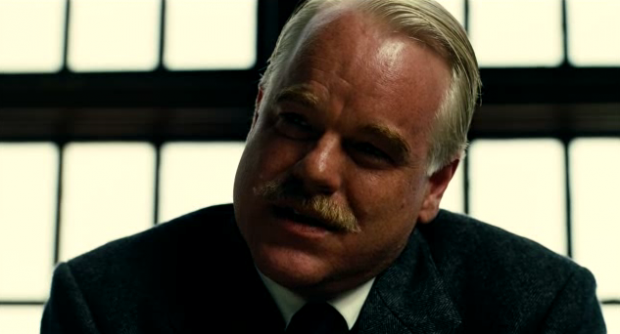 A couple weeks ago I went to see The Master, the newest film by Paul Thomas Anderson. I spent that particular Driving Home the Movie basically shrugging my shoulders and saying, “I don’t know.” I knew going into the movie that it was going to be very cerebral and a movie that needed you to pay attention, but I just didn’t get what the filmmakers were trying to say. Now that I’ve had some time to think about it, I have a slightly better idea about what it was about … but just slightly better.

So, in the first scene with protagonist Freddie we see that at best he’s a bit strange and at worse he’s a real creep. Right before he meets Dodd, the Master of the title, Freddie is still pretty scummy, erratic, an overall not very pleasant human being. Once he meets the Master and becomes a part of his crew set sail for New York, we think this is when he starts learning, starts changing seemingly for the better … but he doesn’t. Even after that first eye-opening session with his will-be mentor, he still acts manic and to use Dodd’s words, “like an animal.” He steals, he attacks people he doesn’t like and he makes cocktails out of gasoline and other poisons.

So then we have Dodd. The movie was billed as a parallel for the start of Scientology, but to be honest it could be any zealous organization, especially in the self-help field. You don’t necessarily start to believe him, but you do believe that he is earnest in his beliefs. In that way, the audience relates far more to Dodd than Freddie. Like Dodd, we keep waiting for the ball to drop, for Freddie to finally “get it” and start changing. There are a few times when we think it’s going to happen, it almost happens … and then he punches a cop. Or he throws a tomato at a naysayer. He does come to the fold eventually, but it doesn’t last long. By the end of the movie, you get why Dodd is fed up with the guy – I was fed up with him, too. I left the theater just being exhausted by the experience.

Like I said, I’m still not entirely sure what Anderson was trying to say with the movie. My best guess is that he’s playing with the expectation that the Master is consciously trying to swindle his followers and yet shows the Master in a more positive light. Unfortunately, if that’s what the movie was about, it failed to fully actualize it. I would really love it if someone who’s seen the movie can tell me what they think, because I’m still stumped by it.