Like many people, I first heard about The Imaginarium of Doctor Parnassus way back in January of 2008, almost two years ago. If you recall, that was when Heath Ledger was found dead in his New York apartment. Doctor Parnassus was still in the middle of filming and Ledger, who played one of the main characters, had only shot a section of his scenes. There was speculation that the film was in real trouble (apparently even director Terry Gillium initially thought the film was done for with Ledger’s passing). What really saved the project was 1. Gillium’s flexibility with his own vision and 2. the fantastic and mystical setting of the film itself.

So the movie starts with Doctor Parnassus (the immeasurable Christopher Plummer) who runs a magical traveling theatre troupe with his beautiful daughter Valentina. The good Doctor has a secret, however: a thousand years ago he made a deal with the devil for immortality in exchange for his daughter when she turns 16. With her birthday coming up soon, the devil makes Parnassus one more bargain; if he can complete five different tasks, he can save his daughter. The newcomer Tony (Ledger) decides to help Parnassus and travels through mysterious worlds to rescue Valentina.

What makes Gillium so lucky is that the scenes Ledger hadn’t been able to shoot were the ones in the alternate worlds. It was decided that in each world, the character would be slightly transformed, and therefore be played by a different actor (Johnny Depp, Jude Law and Colin Farrell respectively). I actually respect all four of these actors and the necessary change in casting can actually fit within this quixotic story and universe, so this could very well work.

As far as the trailer is concerned, the movie looks stunning. Even within the short minute and 45 seconds, you can see the kind of humor only a former Monty Pythonian can bring to the screen. And while these are very different actors, I was surprised how similar Ledger, Law, Farrell and Depp look in both physical appearance and personality… from what we are shown, it doesn’t feel forced. And Depp seems to be having a lot of fun with the role, which is almost always a good thing. I did find it interesting that you see much more of Ledger than any of the other “Tony” actors in the trailer. Maybe that’s because Ledger is considered the “real world” Tony. It could be that the filmmakers didn’t want to confuse people during the first trailer by showing too much of the other actors. There’s a small part of me, however, that wonders if they are trying to focus on him to profit from the “Ledger’s very last film” hype. I hope that isn’t the case. Never-the-less, I might just have to see this when it comes out on Christmas Day.

By the way, while I realize it’s a long standing fairy tale tradition, I do find it just slightly annoying that Parnassus trades in Valentina for immortality. But at least Parnassus gives the girl’s freedom up for something priceless… in Rapunzel, her father gives her up for radishes.

EDIT: Just wondering, but does anyone else get a Troy McClure/Professor Horatio Hufnagel feel from this movie? 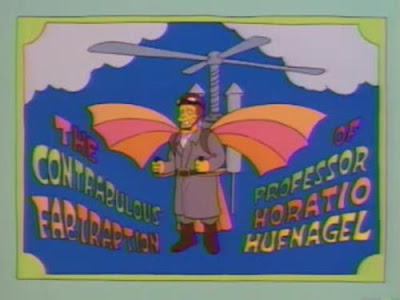