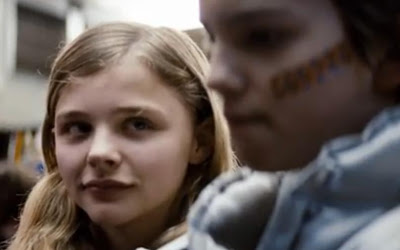 Most of you know my opinion of remakes… they tend to be not so great, a sickly shadow of the original. This is often even worse with horror movies and doubly worse for foreign horror movies (think of every Japanese horror film from the last 1o years). So, when I heard that they were making an American version of Let the Right One In, the 2008 Swedish film that has won the hearts of many movie buffs, I was worried. But after seeing the trailer for the remake… it might not be so bad. They could make this work.

First, here is the new trailer:

Next is the trailer for the original film:

I’ll admit, I haven’t seen the original yet (it’s on my

Netflix queue and I will see it before Let Me In), but I still have a good feeling about this remake. The story of this little boy and his kind but dangerous friend is dependent on really good acting from the kids. I’ve seen Chloe Moretz in enough movies (especially Kick-Ass) to know she can handle a mature role and from the trailer, it looks like she’s really growing in her craft. The chemistry between her and Kodi Smit-McPhee seems great and I’m looking forward to seeing the film in theaters. I can’t promise it will be better or as good as the original, but I think it will at least do Let the Right One In justice.

Early warning to parents: even though kids are the main characters, don’t let your little kids see this movie. I saw this happen with Kick-Ass; parents thought it was a kiddie movie about superheroes and didn’t expect to see Chloe Moretz stabbing thugs in the throat to the music of Joan Jett. If you go in thinking its a G version of Twilight, your kids are going to probably need therapy.