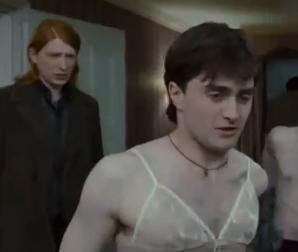 Movie Trailer, PotterWatch PotterWatch, Trailers 1 Comment
PotterWatch is a special group of posts on Just Plain Something dedicated to a certain film franchise about a certain teenage wizard.

The last PotterWatch was about the new theatrical trailer for Deathly Hallows Pt. 1. Well, we’ve just got a new batch of TV commercials and they might be shorter, but the new footage is worth taking a look.

Mad Eye being a smart ass is something we didn’t get to see too much of in the movies, so the polyjuice potion line was great. Too bad we won’t get to see much of him. The real notable part of this trailer is maybe a little disturbing. No matter how you try, you will never EVER get this image out of your brain.

By the way, did anyone else notice Dobby used a first-person pronoun? Anyway, here is the 2nd new commercial.

This was by far the better commercial. First of all, the Ron “Please don’t tell Hermoine I actually complimented her” line killed me. But the real beauty in this trailer comes in the last clip. Ginny might still seem pretty stiff, but that last shot before the title had me almost falling off the chair laughing. When you’re kissing your girl for maybe the last time, the last thing you want to see in the room is her brother who just went through head trauma:

“Yeah, don’t mind me. I just lost my ear to save your Chosen one ass, but you just keep sucking on my sister’s face.”
Deathly Hallows Pt. 1 opens on November 19th.
Share On