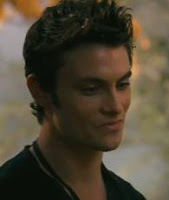 A few months ago, I posted a less than enthusiastic review of the first Red Riding Hood trailer. I couldn’t help but assume the film would be a rip-off of another not-so-good Catherine Hardwicke film by the name of Twilight… just more sappy bad boy worship. In meadows. With far too much mist. Well, now that the movie is close to release, the TV spots are coming out. And I noticed something kind of strange about them.


Seems like a pseudo-historical horror flick, right? Now, look at that trailer I posted way back in November:


Like I said in Autumn, it’s just needs sparkly vampires and some pissed off Native Americans to be a Twilight prequel. Again, look at the two smarmy, pale, pointy-haired love interests.

The question is, why the big shift in advertising? It’s a pretty big leap from preteen fodder to early American settler horror flick. My guess is that enough members of the focus groups were lukewarm for the preteen fodder and they switched their marketing to lure in the less sappy consumer. I’m wondering which ads are closer to the actual feel of the film. I still think it’s not going to be a very good film, but if there’s as much Gary Oldman in it as implied in the TV spots, that can only do it good.