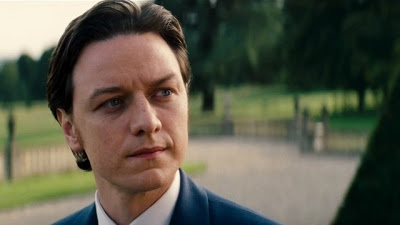 It hasn’t escaped me that I’ve been writing about quite a few different trailers this month. I also realize that the review I keep promising hasn’t been put up yet. For those of you still anticipating the review, I promise you it is coming, but it might take toward the end of the week. For now, watch the very first trailer for X-Men: First Class.

Until I saw this trailer last week, I really wasn’t looking forward to this movie… thanks mostly to the X-Men 3 and the Wolverine film. But this looks awesome. Funnily enough, the only part of X3 that I liked was the opening flashback with Erik and Charles going to meet Jean Grey for the first time. Watching this trailer, it feels like that.

Now that I’ve seen the cast as their characters, I’m so excited. I don’t know how they got two smart-sexy looking guys to play Xavier, but they did. Sorry to sound so much like a girl, but James McAvoy is so yummy in this trailer. He does Patrick Stewart proud in his sexiness.

Michael Fassbender was cast as Erik/Magneto and I can’t think of anyone better. He’s German-born, but raised in the UK (which was used to his benefit in Inglourious Basterds, too). He can really bring his family’s background into the role in a way that many actors couldn’t. He was also the antagonistic, but complex king in last year’s hit video game Fable 3, so I think he’s up for the complexity of this role. I’m also intrieged by the choice of Nicholas Hoult for Hank McCoy/Beast. While he’s been in lost of stuff in the last few years, Hoult is probably best known as the kid in About a Boy. It’s crazy to see him all grown up (and apparently getting some lovin’, if I saw the trailer correctly).

The only person I’ve really questioning is January Jones as Emma Frost. As much as I love Mad Men, Emma Frost is a compelling character and I worry Jones won’t have the presence to pull the character off. I also wonder how if they’re keeping the ages accurate, especially when it comes to Mystique. Exactly how old is she supposed to be in this film, considering we see her in bed in the trailer?

What I love most about what I’ve learned about the film is the plot. Having the film center around the Cuban Missle Crisis is intrieging in so many different ways: the US Government looking into using mutants as weapons, Erik and Charles disagreeing with whether to protect humans or toss them to the wolves, Red Scare paranoia vs fear of mutants, etc. There’s so much they can do that would weave into the relationships between these characters while they begin to create Xavier’s School for Gifted Youngsters.

The film opens June 3rd. Are you excited? With such a big cast, were there any other casting choices that popped out at you?