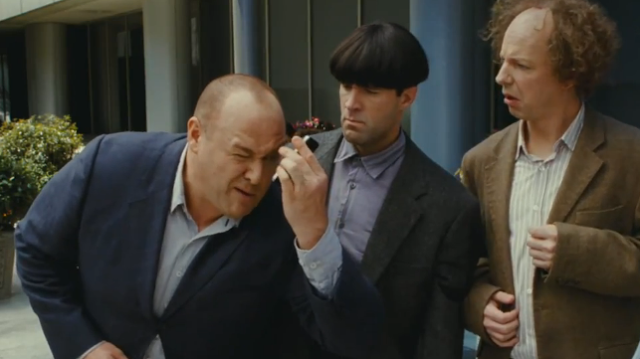 For the record, I like the Stooges. They were never my absolute favorites as a kid, but they were pretty funny and had great chemistry. Their shorts worked because they were just that – shorts. Short and sweet, which helped with the timing of the jokes. But today … today the trailer for the rebooted The Stooges Movie came out. And it is so, so crappy. I know it’s only the first trailer and there could always be a chance I’ll be eating my words come its spring release, but this is not a good sign, guys.

The main defense I’ve heard for the trailer today (from people who are far too excited for the damn thing even more so after watching the video) is, “Well, you’re not a devoted fan, so this is probably not your movie.” For one, I’m fine with the Stooges’ humor and I personally love classic slapstick (see Bringing Up Baby). For another, I’ll see your devoted fandom and raise you Charlie Lawton!

Charlie, aka film_geek, is a long-time friend of mine and a supporter of Just Plain Something. He’s also one of the founders of the highly acclaimed and amazingly cool Toronto Underground Cinema. He also happens to be an avid film buff (imagine that, running a theater) and an avid Stooge fan. And guess what? He hated the goddamn trailer, too! He actually hated it before I got a chance to see the thing. His exact words were, “I don’t want to live on this planet anymore.”

So, by pure fate I was able to catch him on a rare night where he had an hour to spare (one of the hardest working people I know, I swear) and we talked about our intense loathing for this piece of crap. Watch the trailer below, because if Charlie and I have to suffer, we’re taking you all down with us:

Katie: So Charlie, can you tell me in less than 10 words what you thought of the trailer?

Charlie: Really though it would be “trying too hard.” It had moments of looking like the originals, but it just felt off somehow. For every joke that was right, Snooki walked on screen.

Katie: So… one good joke then?

Charlie: Pretty much. There’s a bit of slapstick in the middle that was decent, and the Stooges are playing the parts well, but a lot of the other stuff is so wrong. I mean a hot nun? COME ON.

Katie: That’s exactly what I said! The hot nun was super creepy.

Charlie: She was. Also, the opening voice over felt really, really weird.

Katie: And what about that awful iPhone joke? Topical humor doesn’t work in a movie with classic characters.

Charlie: Exactly, Curly’s voice is perfect, it sounds like the Stooges, but they wouldn’t be doing those jokes.

Katie: I’m not usually great about noticing cinematography off the bat, but it doesn’t look like it was shot very well. The original shorts were shot so much better than this.

Charlie: True, it looks like a cheap version of the Stooges, which is funny since even with inflation I’m sure the movie costs triple now at least.

Charlie: Oh, the groin gag was the worst. That is the Farrelly Brothers’ humor, not the Stooges, which makes it all the worse. Come on guys, we know you love the Stooges, try to humor them a bit.

Katie: I know the Stooges have a certain level of low brow humor, but the trailer was just vulgar. And this is coming from the girl who reviews Always Sunny in Philadelphia.

Charlie: There’s a difference in low brow (which the Stooges clearly were) and this. This just has an … off tone. It feels like a crappy comedy, not a Stooges film. Which does suck, because there was a moment in the middle of the trailer when I had a bit of hope. The slapstick in the middle works – it is the right tone, the right feel, the right flow. Then it just goes downhill.

Katie: When they’re taking cues from the Stooges shorts (the pratfalls, the physical comedy that doesn’t involve penises), I agree that’s when there’s some glimmer of good. Then we get nun boobs and Snooki (and with her, Snooki boobs).

Charlie: Oh god, so angry. Her “ow” when she gets slapped was so bad AND awful.

Katie: Can you get more bad topical than Snookie and her badly acting face?

Charlie: Plus, imagine if this is the best they can get for the trailer… what’s in the film? ~shudder~

Katie: What’s even scarier is how many fans will go see this simply because it has the Three Stooges in the title. I guarantee you, this will make money before most of the reviews are in.

Charlie: Yep, it will. The best way to describe my feelings is that this feels like it should be good. The actors look right, they seem to really have the knack for the physical comedy, but it looks like the film around them is wrong: the script, the story, the other actors, the shooting, the set-ups are all wrong. And that’s why it’ll be bad. The actors seem good (or even better than good) at mimicking the Stooges, but the film they are in isn’t the right film. Mainly it just makes me want to rewatch the good, real Stooges.

Katie: See, I was always more of a fan of the Marx brothers for their wordplay, which is one of the reasons the dialogue in this shitty trailer pissed me off so much.

Charlie: Yeah, I liked the Stooges for the slapstick, the Marx Brothers for the wordplay and Chaplin for being the best.

Katie: By the way, if you’re going to do stupid humor, go the Airplane! route and write the stupid humor WELL.

Charlie: Exactly. The Farrelly Brothers are not the right fit for this style of humor. It’s obvious they were huge fans of the Stooges, but their style is different, and it doesn’t fit.

Katie: Can you think of a writer/director that would have been a good fit?

Katie: I can see that, especially with some of the tonal shifts in Spiderman 2.

Charlie: Yeah, and also Army of Darkness. The graveyard scene is Three Stooges meets Jason and the Argonauts.

Katie: I could even see Bruce Campbell as Moe.

Charlie: Ha, that’d be awesome. Though really, I still get a decent vibe from this cast. Moe was in it the least, so I’m not sure on him, but the other two are good. Sasso seems like he’s channeling the guy.

Katie: Yes, I will say that the trio really tries here. It’s just a shame that what we’ve seen of the jokes is abysmal.

Charlie: I know, it actually makes it worse that you can tell they were trying.

Katie: You know, when I first heard about this, I was really expecting this movie to be set in the 20th century and have it be black and white … God, why do I set myself up to be disappointed?

Charlie: It’s what all us film geeks do.