Home  /  Movie Trailer  /  The Wicker Tree teaser is haunting, but a little too familiar 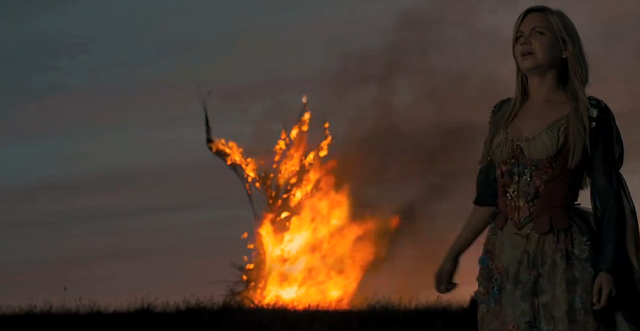 When most people think of The Wicker Man, one of two things come to mind.

Either you think of the bold 1973 horror film that took on themes of religion, anti-nativism, sexuality and morality …

Or you think of the 2006 remake, which features Nicholas Case screaming about bees. And punching a woman in a bear suit.

Yes, the original was better, but that’s kind of like saying The Birds was better than Birdemic. The Wicker Man‘s remake was a hot mess and practically everyone involved with the original distanced themselves from the remake. So, I was surprised when a friend pointed me the other day to The Wicker Tree. It’s not a remake nor is it a sequel, but it is a reinterpretation written and directed by Robin Hardy, the man behind the original film. Actually, The Wicker Tree is a film adaptation of Cowboys for Christ, which Hardy wrote. Check out the trailer:


A little information on the story: in this re-imagining, an young evangelical American couple go to work as missionaries, spreading the word of God to an isolated town in Scotland. From what I can tell, the rest of the story is a variation on the original. Christopher Lee (who is in both 73’s Wicker Man and now Wicker Tree) has publicly denied the two films being related, but the similar themes are hard to ignore. I’ve read a little more about the book’s plot and because the mystery isn’t so much of a mystery for anyone who knows the original, I question if the movie will have even close to the same impact as the original.

What I will say for the premise is that having two righteous Christian outsiders instead of one will be interesting, especially as things become stranger and they begin to question the reality around them. Will their relationship be able to stay strong in such an alienating place as their core beliefs are tested? … No, I really doubt it. Their relationship is going to crumble like moldy bread. I’m also placing bets that the girl’s fiance is seduced by a busty barmaid before the movie’s over.

Now, as for the trailer, the creepiness is definitely there. I also like the use of traditional American gospel hymns like the use of the folk music from the original film (although the folk music was based in Paganism while gospel comes from Christianity, so I’m not sure how well it works as a parallel) and I like the fact that Christopher Lee is in the movie. He tends to make things better and he’s another tie to the original. The general feeling of the trailer is quiet terror … if they can keep that in the movie, then this could be good.

The film received mixed reviews when it was shown at Montreal’s Fantasia Festival last summer, but it’s coming to the States in limited release this weekend. From what I’ve seen and read, it won’t be as good as the original. However, it looks creepy, it’s written and directed by Hardy and there are no bees in sight. Already I can guarantee it’s better than the Nicholas Cage version. It has to be.

Images from: British Lion Films and Millennium Films
Share On