Home  /  Movie Trailer  /  Thanks to the newest trailer, I’m officially sold on The Avengers 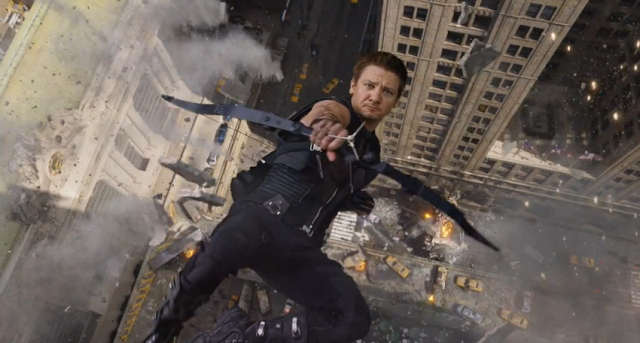 Oh, Joss Whedon. You make me so happy  … as long as you aren’t killing off characters. Then you make me sad. But for now, you make me excited, because The Avengers (or “Avengers Assemble,” as the UK trailer is calling it) looks great. And fans, I’ve got the screenshots!

“You have made me very desperate.” I swear to you, only Samuel L. Jackson could say that sentence and keep that level of badass. And he’s being completely honest with that statement – he is completely desperate. And is team is still going to do everything to kick Loki’s ass.

OK, I have two ideas on this moment. One, this is when he first comes back to Earth and he’s pissed he’s caged while they figure out what to do with him. Two, Natalie Portman’s character just died. OK, she’s not in the movie, but maybe something happened to her. It’s just a guess in the dark, but he looks pissed off enough that I would guess something more than just capturing him just happened.

I tried to get a good shot of Thor and Tony fighting, but it went by too fast. It’s going to be great seeing these three very different men working together. In one way, Tony and Thor have similarities in their swagger and general lives of privilege. On the other hand, Steve and Thor both come from a tradition of honor, of standing by your band of brothers. As I’ve mentioned before, Steve and Tony are going to butt heads because they are so very different … and the whole Tony’s dad thing. If it turns out Steve’s main squeeze from the last film is Tony’s mom, I suspect Steve is going to go all Severus Snape on Tony.

Scarlett Johansson is a very lovely looking woman. She is very pretty here. You know what else is great about this picture. SHE ISN’T SHOWING ANY CLEAVAGE! I was so giddy over this that I bounced up and down on my sofa for joy when I watched this video. This past year we’ve seen so much coverage of comic book heroines drawn ridiculously and we’ve seen some unnecessarily sexy teaser art for this character in this movie. But here we see Black Widow in a third world jungle hut, hunting down Bruce Banner and she’s in an appropriate tank top. You just know this has to be partially Joss’s doing. Can you imagine if Michael Bay was directing? Can. You. Imagine?

“Scratched-up Iron Man is upset with you, audience.” Just today while I was waiting for a chance to watch the trailer, I remembered how at the end of Iron Man 2, Nick Fury had assured Tony Stark he would not be an active member of the Avengers Initiative and I wondered if they would acknowledge that Tony has become a huge part of the film. Oh, of course Tony mentions it … he just rubs it in. Because let’s face it, Nick Fury is desperate. He’s going to use Tony and he’s going to have to deal with Tony being a dick about being needed.

HULK SAVE IRONMAN! HULK NICE GUY LIKE THAT! NO BIGGIE FOR HULK! HULK WORK OUT!

And you don’t have to be Michael Bay to make explosions! Yes, this looks to be an awesome mix of well-written characters and explosions … two of the greatest things in the history of cinema. And I do like that Captain America was a gentleman and shields his lady compatriot from the fiery blast of death. Now that’s chivalry!

Remember what I said about Black Widow’s appropriate outfit? Her fight gear is still pretty damn good! Yes, she’s not zipped up all the way, but she’s almost completely protected, it looks relatively easy to move in and there’s no cleavage! This was my biggest problem with Catwoman’s costume in comics in the last few years … she has a zippered costume, but she rarely zips it up even when doing acrobatic stunts or fighting enemies with skin stabbing weapons. Here, Joss and his team (yes, I realize it’s not just him who makes these decisions) have given Black Widow a costume that’s pretty damn functional, appropriate for her no nonsense character and to be honest, appealing to women who would be turned off by a gratuitously sexy costume that’s sexy for sexiness’s sake. Again, imagine the alternate universe where Michael Bay is directing this movie. Imagine her outfit now. This one is better. Also, I love that besides Hulk, the team member showing the most skin is Hawkeye. Just look at his slutty arms … his lack of sleeves is a scandal (although to be frank, you’d think the other non-superpowered hero would protect his arms, which he uses to wield his main weapon).

We have just about two months until the May 4th release. I’m excited to see what Joss can do with this. Are you excited, too?