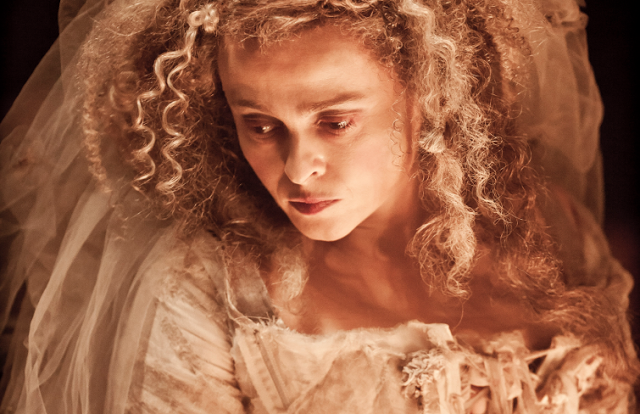 Holy cow, you guys – I can’t believe it’s been nine months since I first mentioned Helena Bonham Carter taking the role as the rather kooky Miss Havisham. It’s been too long since I’ve talked about Harry Potter actors working on projects together again and also weird women in aged wedding gowns. Too long, I say! (Rabble rabble, harumph harumph!) And that is why I’m very happy to see the first official trailer for Great Expectations, complete with Bonham Carter in said crusty wedding gown. Check out the Dickensian goodness after the jump (and yes, the German subtitles are totally on purpose. You’re welcome, German JPS fans who can’t understand English. Wait…)

I am interested in seeing the movie because I never had to read it in school (because I was in the honors English program in high school so instead of reading Great Expectations first thing Freshman year we read Henry V … because when you’re starting off students with Shakespeare, obviously the histories are the most accessible. Cue eye roll). But watching the trailer I had a revelation: I’m pretty sure when the obsessive Men’s Rights Activists talk about the widespread female agenda, they’re imagining women are all basically Miss Havisham. That we’re all going out of our way to ruin men’s lives through elaborate schemes and teaching younger women to be manipulative empty husks. Essentially if Miss Havisham had a moustache, she’d be twirling it and cackling, but I’m sure she’s going to end up cackling anyway. But like I’ve said before, Helena is very good at the crazy and sadistic, so I’m looking forward to her turn as the antagonist.

The other aspect of the trailer that intrigues me is Estella, who seems to be much more honest than I’ve been led to believe from what I’ve been told about the story. In the trailer she seems to be flat-out telling Pip, “Hey, whoever I marry I’m not going to love, so stop pursuing me. I’m never going to love you but I don’t hate you or want to hurt you,” and yet Pip is all, “I’m just going to pursue you more because I can make you love me!” Yeah, very healthy there, Pip. I’m just interested in seeing if they play Estella as a more sympathetic character.