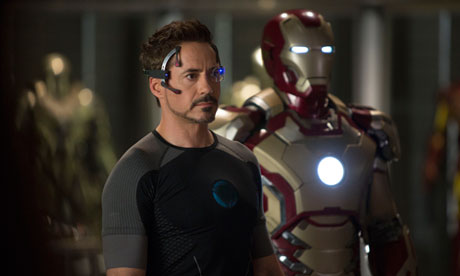 Remember when The Avengers was really good and was also insanely commercially successful? Yeah, it was pretty awesome. And despite the tension that ran it’s way throughout the would-be team in the first two thirds of the movie, The Avengers had a pretty optimistic tone throughout. The ending was certainly a triumphant victory for our heroes and they all left for their own homes (and movies) with the idea that everything was going to be OK. And then … we say the Iron Man 3 trailer. Pardon my french but … shit’s about to get real.


I know so little about the classic Avengers and Iron Man canon, but I do know that the villian shown is Tony’s longtime antagonist the Mandarin. Outside of the rather awkward casting of Ben Kingsley (which is a discussion for another day), from everything I’ve been told about the character himself, the Mandarin is a very dark character, very serious about how he treats his enemies … and that comes through in the trailer.

Perhaps the biggest focus of the trailer outside of seemingly everything Tony owns blowing up is how much of a target Tony has made Pepper through their relationship. Because he doesn’t really care much about the houses or even his suits. He can buy or built them again – they are replaceable. But Pepper isn’t and targeting her means you are making a very dangerous enemy out of Tony Stark. But I don’t see Pepper actually dying; it just doesn’t make sense to hint at it in the first trailer because you know … no surprise. And the harder Tony falls, the stronger he’ll push back. After all, the very last moment of the trailer shows him pulling his damaged suit through the snow. You just can’t stop that guy.