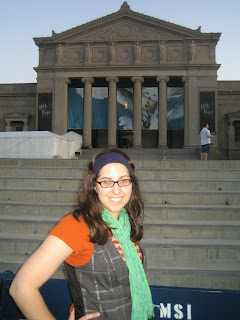 Even after missing the train into Chicago and having to wait an extra hour and a half, I did end up visiting the Harry Potter exhibit (at the Museum of Science and Industry) this weekend. Even if you aren’t a huge Harry Potter fan, as long as you are interested at all in set and costume design, you’ll really love this exhibit.

A good amount of the exhibit are props. You get to see some of Ron and Harry’s possessions (Ron has a Chudley Cannon’s shirt signed by the team and his taped-up wand). Slughorn’s area has a box of bezoars and the vial of Felix Felicis, among other things. I got to see the bogart wardrobe from Prisoner of Azkaban and it was so cool to see my reflection in it. Right next to it was the creepy-as-hell jack-in-the-box from the same scene (I’m not the only one that would have preferred the bogart as the snake, right?). The Weasley Wizard Wheezes were also on display (I always wondered what puking pasties looked like). And I liked seeing the Elder I mean Dumbledore’s ordinary, run-of-the-mill wand (wink) and the life-sized Fawkes the phoenix model. The majority of the displays were on a “no touching” basis, but there was a Quidditch section where you could throw quaffles through mini posts. They obviously weren’t genuine movie props, but I thought it was great we were able to feel how heavy they are (they are actually very light, especially for their size). And everytime you made a goal, a bell would ding just like in the movies, which was a nice touch.

There are tons of costumes in this exhibit and they span all of the films so far. Man, the details are unbelievable on these clothes. You notice a good amount of these details when watching the movies, but it’s a totally different story when you are up close and personal. Hermoine was actually wearing ballet flats, not heels, at the Yule Ball. The recently updated Quidditch uniforms look more like sport jerseys, which makes a lot more sense than what they wore before. Viktor Krum’s fur cape has clasps that look like animal claws and Lucius Malfoy’s belt has three metal snake heads connecting together. Voldemort’s graveyard robe is very billowy; so billowy, in fact, that they installed a fan behind it just to enhance the billowiness. It was also crazy to see the costumes from Sorcerer’s Stone and realize just how small the kids were when they started out. And may I just say, Ron’s formal robes are actually funnier in person.

There were a few things I was looking forward to seeing that weren’t in the exhibit. I didn’t see Gaunt’s ring or the fake locket. It would have been awesome to see some of the Weasley’s store besides the candy. Sure, it was in the most recent movie, but so were the updated Quidditch stuff and that managed to get in the exhibit. I was a little annoyed that the exhibit’s website mentions a recreation of the Great Hall, but it’s really the Great Hall’s entrance which just leads to another small room. Don’t get me wrong, the entrance is really cool (Umbridges’ decrees are still hung up), but the next room is a little disappointing when you’re expecting something bigger. 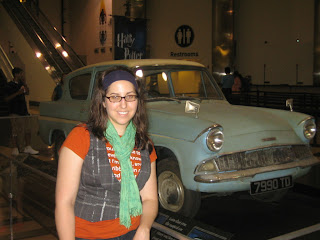 I actually enjoyed myself quite a bit, but they did not let anyone take pictures inside the event. We tried, I swear. My devoted boyfriend Mike attempted to be sneaky and slowly pull the camera out of his pocket for a few shots, but there was always an employee just a little too close to us. So, the only pictures we took were outside the actual exhibit, but that at least includes the infamous Ford Anglia used in Chamber of Secrets. I never realized how small that car is (it had to be about 4 feet tall at most). It’s probably a good thing Harry and Ron took the Anglia and not, say, a Hummer.

All in all, a really entertaining time. I do have to warn you, however, the employees all speak in faux British accents (honestly). The exhibit is staying in Chicago until the 27th and it will be in Boston in late October.